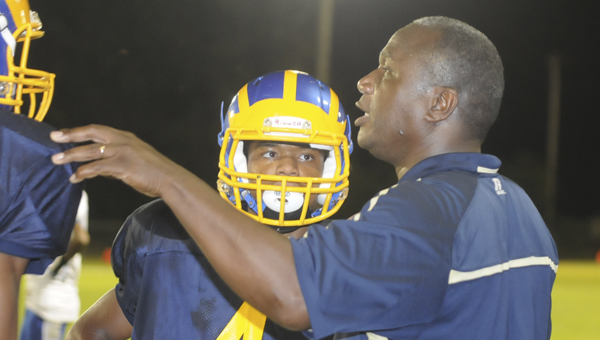 “As long as I’ve been at Keith, I saw that it was a real possibility after 17 years that I was no longer going to be the head coach,” Crum said. “That’s the end of a long chapter for me at Keith High School, as far as football is concerned.”

Crum has been the head coach for the Keith Bears for 17 seasons and made nine playoff appearances in the past 10 seasons, but when the board put his future to a vote, only one member voted in support of the veteran coach.

Prior to the vote, the school board had access to Dallas County School System Superintendent Hattie Shelton’s recommendation and Keith principal Tommy Tisdale’s letter in support of retaining Crum as head of the football program.

Despite the support of the principal and the recommendation of the superintendent, only board member Carolyn Bates voted “yes” to keep Crum.

Board members William Minor and Leroy Miles abstained from the vote, while Roy Edwards and board president Mark Story voted “no.”

All personnel decisions for the school system, athletics included, are brought to the Board of Education for approval, but Bates believes that Crum was isolated intentionally for political reasons.

“It had nothing to do with his performance. That’s why you terminate somebody. Based on their performance and disciplinary action, and there weren’t any,” Bates said. “The public needs to know about the Dallas County Board of Education and the unfair hiring and promotions that goes on in the school district. I feel that was unfair for the termination of this coach’s job.”

Crum, who was at the meeting, left without an explanation as to why his coaching career had come to an end.

“I was never given an explanation as for the reason for non-renewal,” he said. “I realize that in the state of Alabama they give the local boards the discretion with coaches.”

The precedent that the board has set with the vote leaves a risky situation for any prospective coaches, according to Crum. Even with the endorsement of his principal and superintendent, a coaching job still isn’t safe from the board of education.

“What it will do, is open up the doors to say ‘If they would do him like that, with the longevity of his service, then I realize that I’m very expendable.’” Crum said. “I think that’s what it does for anybody that comes in behind somebody that has been dismissed in this manner.”

Bates suspects that the vote was lost because Crum supported Melvin Flanagan-Brown, who ran against Edwards for the Dallas County School Board District 2 seat.

“The Dallas County School District, as I see it, is a political district,” Bates said. “The hiring and firing is sometimes not even based on job performance. It’s based on whether a board member likes or dislikes the person.”

Edwards denies that his vote to remove Crum was personally motivated, and that he voted against Crum’s return in order to bring more excitement to Keith football.

“Basically, it came down to fan attendance and some of the fans complaining that it wasn’t exciting enough,” Edwards said. “More of the same every year. They wanted to see if we can bring somebody in that is going to try to do things a little bit differently, and perhaps set a goal to get a championship. We’re not satisfied with one-and-done anymore.”

The Bears have traditionally run the Wing-T offense, which is primarily a running formation for options and counters. Crum added some influences from Gus Malzahn’s power spread at Auburn, but the run-first mentality remained the key to the Bears’ offense.

Last season, the Bears averaged 31 points per game, finished with a 6-5 record and lost to Abbeville in the first round of the playoffs by only four points (16-12).

“[Keith] never could quite get over that hurdle because we basically have been a running football team running the same offense for a number of years,” Edwards said. “We want to look for someone who will have more of a balanced attack and throw the football more. That’s what we want to try to do and get the game more exciting so we can get people to come out and watch.”

Even though he will no longer be involved with the football program, Crum said he’ll still miss the connections he built through Keith football.

“My interest is still the kids, and it always will be,” he said. “A lot of those kids look up to me like a father, and this won’t terminate my relationship with them. I’ll still be available for those kids.

“The people of Orrville and the Keith community are some of the greatest fans in the world. I will miss that part and the Friday night lights. Those kids will always be in my heart,” he said.

Keith’s first game in the 2018 season will be Friday, August 24 at home against Billingsley. The Bears had 22 seniors last season, and the team is moving to Class 1A Region 3 with teams like Maplesville, Linden and Isabella High School.

Board members Miles, Story and Minor were unable to be reached for comment before publication.