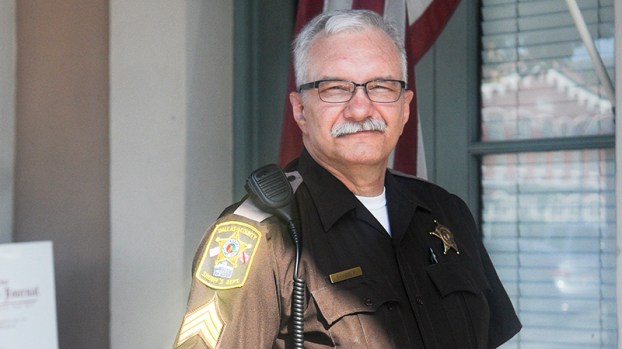 Service: Sgt. Steven Davidson has been in law enforcement for more than 25 years. Davidson is the Time's Journal's first responder of the week. Oniska Blevins | Times Journal

From a very young age Sgt. Steven Davidson knew he wanted to make a difference in a major way. Shortly after high school, he joined the United States Coast Guard’s search and rescue federal marine enforcement.

“I thought to myself, if I ever could I would try and help in some way,” he said.

After serving in the Coast Guard for four years, he decided to continue a full-time career in law enforcement.

Now a sergeant and evening shift supervisor with the Dallas County Sheriff’s Department, Davidson has been in law enforcement for more than 25 years.

Davidson said he chose the career path with the mindset of providing for his family while ensuring others get to do the same.

He said one of the hardest parts of his job is the miscommunication between law enforcement and the general public.

“There is good and bad with law enforcement,” he said. “The general public thinks they know as much or more about our job than we do, and when we try to go by what state law tells us to do. People get aggravated about that.”

He said the calls received while on duty are all different, and can range from a terrible situation to a minor one.

“You do the best you can on the given circumstance at that moment,” he said. “There is no generic call. Every call is different.”

Aside from the miscommunication issues, death is the hardest thing for Davidson to deal with. He said even after being in law enforcement for so long it never gets easier to deal with someone dying.

“I was the first one on the scene at a wreck on the bypass,” he said. “I watched a young man die. I watched it happen.”

Having to quickly adjust and answer the next calls was difficult that day, and he said it is a day he will never forget.

Davidson said even with the bad days he still loves to serve and is honored to have been a part in law enforcement for over a quarter of a century.

May is for Meto exceeds fund goal

Giving back is at the core of Integrity Worldwide’s identity. Founded by Alan and Averee Hicks in November of 2006,... read more