Consistency is key for Keith 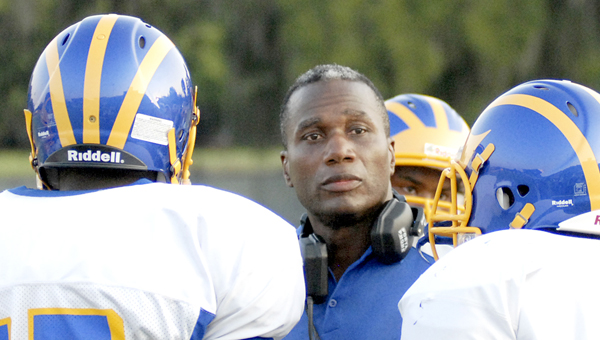 Head football coaches in Dallas County come and go almost nearly as often as the kids that matriculate through their programs.

Whether for a new coaching opportunity or a myriad of other reasons, most coaches that come through don’t stay in that position too long.

Dallas County High School has gone through 29 head coaches, and Earl Griffin’s 13-year run from 1965-1978 was the longest stint for a Hornets head coach.

Selma High has been through 35 head coaches, and Willard Whitcomb was with the Saints for nine seasons from 1973-1981.

Ellwood Christian Academy’s program started in 2009, and Mike Stokes was with the team for nearly three seasons(non-consecutive).

Meadowview Christian School’s Bobby Wasden coached the Trojans from 1981-1987 for the longest stretch in that school’s history.

There has been only one coach in the Dallas County area that has spent more time as a head coach at the same school than Gartman, and he still has more left in the tank.

“To see a coach that has a tenure of longer than five years is amazing,” he said. “There are a lot of factors that go against a coach staying in a place a long time. Sometimes expectations aren’t truly realistic, and for me to stay here in Dallas County, I’ve seen a lot of coaches come and go.”

He first joined the football program as a volunteer during coach Lemuel Jones’ final year in 1997, when he came to the school to teach.

The principal of Keith High School noticed Crum played college football at The University of Houston, and immediately got him involved.

Keith High soon added a middle school program in 1999 and Crum was its first head coach. Two years later, coach Mark Hurt stepped down from the varsity job and the Crum era began.

His first game was against cross-county rival Dallas County, and he won 28-21. A good start that was quickly humbled by a 38-0 loss to Selma High the following Friday night.

Nonetheless, Crum had planted his roots in a program and a community.

Crum’s overall record is 73-105 and he’s made the playoffs in nine of the past 10 seasons.

After his 4-5 rookie head coaching season, it took six years to build the Bears into a program that could contend for a playoff spot each year.

“We went through some one-win seasons, but I didn’t leave because I knew those kids loved football and wanted to get better,” Crum said. “I stuck with them, and eventually things started turning around.”

The 2012 team Crum believes was his best chance at advancing to the second round until his star player Charles Johnson was injured. That Bears team opened the season with an eight-game win streak, and three players earned all-state selections.

“That was the year I thought we were going to advance,” Crum said.

The team lost in the first round to St. Jude, and that was also the last game Crum’s father saw before his passing.

Aside from the three-win 2014 season when the Bears didn’t make the playoffs, Crum has consistently gotten the Keith Bears to the playoffs over the past decade.

The Bears have advanced to the second round of the playoffs just once in the school’s history. Jones’ 1995 team defeated Sulligent in the first round 30-14, but lost to Dadeville the following weekend.

Getting over that 1st round hump has been a challenge for the Bears, regardless of what year or who was on the team.

“We had gotten into a cycle of making it to the playoffs,” Crum said. “But it was just hard for us to advance. Historically, a lot of the teams that we played in the first round for the most part were teams that were just better athletically when you look at their total program. They had facilities and things in place that we didn’t have.”

However, coaching is more than just the W-L column for Crum. He’s seen football directly have an effect on the lives of the kids that have gone through his program.

Kids who would otherwise have nothing to do after school, get three hours of structured practice and discipline while playing a game that they enjoy.

Teams that think they can run over Keith get surprised when the small 2A school from Orrville lines up in the Wing-T formation and guts them with the ground game.

This past season, the Bears went 6-5 and scored more than 30 points in six different games.

In 2018, the Bears will go back into a rebuild mode after 22* seniors graduated from last year’s team.

“Last year’s team had some really good highlights,” Crum said. “I had some kids that did very well as far as tackles and accolades. The guys put forth a lot of effort, but I would say last year was definitely successful.”

They will also be moving to a tough Class 1A region where they will have to face strong teams like Maplesville, Linden, Sweetwater and Marengo.

Despite all the challenges, the Crum has been dedicated to the Keith football family. His three sons all played quarterback for him at Keith. The Orrville community has consistently shown support for the Bears through game attendance, preparing meals for the teams and even just offering words of encouragement.

“There is a nucleus of people in Orrville that genuinely care about the football team,” he said. “Loving people who have been like family. They have cooked meals for the players, supported them and even mowed the field when needed.”

Crum will be going into his 18th season coaching the Bears the upcoming fall, and even though he could retire, he’s not planning on leaving Keith anytime soon.

“I might retire when I can find a quarterback that can outthrow me. It hasn’t occurred yet,” he said. “It’s been a really great experience coaching at Keith. One of the best things i like about coaching is the connection with the players. Some of them have gone on and graduated college.”