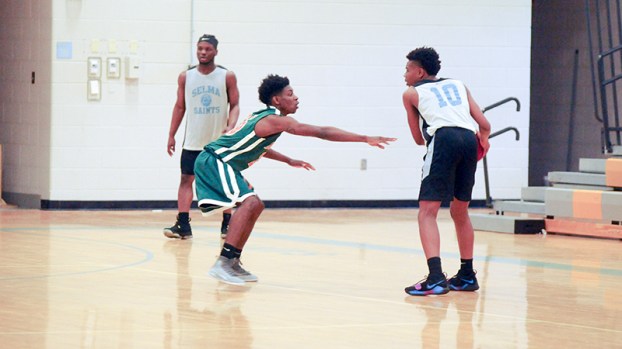 “Everybody got a good look at what they may be looking at next year,” Selma boys head basketball coach Ronald Lane said. “It’s good to keep our kids active, engaged and it’s also a good bonding experience.”

Teams from Class 1A through Class 7A had the opportunity to get to see where their teams stood going into the summer before the 2018-2019 season.

LeFlore High School made the trip up from Mobile. Lee High came over from Montgomery. Hoover High, Central Tuscaloosa, Hale County, R.C. Hatch, Sidney Lanier and Greensboro all traveled to participate in this early-season warm-up.

Dallas County High School and Ellwood Christian Academy were the other two local teams that showed up to play.

The Summer Slam serves as an opportunity for the experienced players to get their summer reps, the younger players to get some game experience and for the coaches to evaluate the competition and their own teams.

Even though the games don’t matter in terms of wins and losses, the players still competed as if they did.

“It’s always excellent energy,” Dallas County head coach Cliff Nix said. “Right now, it’s all fun and games. We want the guys to play hard and see the things they need to work on throughout the summer.”

In the first half of the Dallas County versus Keith exhibition, opposing guards Kendall Thomas (DCHS) and Kendarius Perry (KHS) had a personal shootout mid-game.

“It brought back some memories from the season when they had that shootout,” Keith head coach Clifton Reeves said. “It was fun to see that interchange between the two of them. I started joking with both of them saying we could just let them play one-on-one for the last two minutes. That’s what summer ball is about, being competitive.”

Thomas and Perry traded 3-pointers against each other for back-to-back-to-back possessions.

“We just have fun, go at each other, play hard and do what our coaches ask of us,” Thomas said.

Perry got the “final word” in the exchange by making a difficult right-hand layup through contact. Thomas’ pro-hop through traffic got him to the basket on the following possession, but he couldn’t get the roll.

The Summer Slam was also beneficial to the coaches who are looking for what adjustments they need to make after losing their respective senior classes.

Central Tuscaloosa head coach Kelvin Lett, who played basketball for Selma High in the early 1990’s, was glad to be back at his alma mater for the play date.

“It feels really good to come home and see all the talent,” Lett said. “There’s a lot of negativity, so I like to see the positive things going on over here. The Summer Slam helps you understand what you need to work on as a team and helps get your guys confident.”

The Summer Slam is also an opportunity for players to potentially get noticed. Wallace Community College Selma head men’s basketball coach Duane Evans was in attendance to watch a couple of the exhibition games.

The teams played two 20-minute halves with a running clock. Each team got plenty of work in, and was able to leave the gyms knowing what they have and what needs to be worked on before next season.

“Summer ball prepares you because it gives you a lot of different looks,” Reeves said. “When you get the opportunity to play different classifications, you get to see different teams. This gives us an opportunity to work and prepare as we go into the season.”

School only let out a few days ago, but high school basketball teams are already trying to get a head... read more