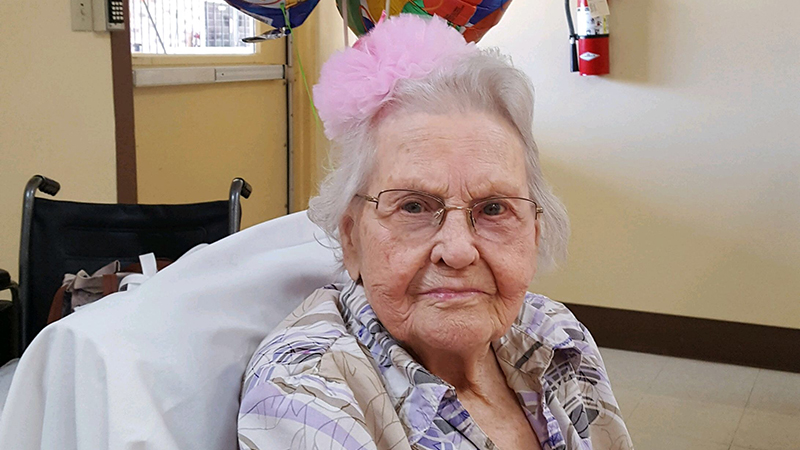 By Derrick Thomas
The Selma Times-Journal

Many people hope to live a long and prosperous life, and Ersie Miller Grindle a centenarian residing in Selma, can proudly say they that she has achieved what others hope for.
Being born on April 13, 1918, Grindle celebrated her 100th birthday at Warren Manor Nursing home, surrounded by friends and family.

Grindle was born in Plantersville, but she later found herself residing in Selma for most of her life.

Grindle is a big fan of a variety of sports, in particular, football and baseball. In regards to football, she considers herself to be an Alabama fan, and for baseball, a fan of the Selma Cloverleafs.

In her youth, Grindle enjoyed doing hair and eventually made it her career. As a hairdresser for many years, she worked at several beauty salons over the course of her life, most notably was Sue Seale’s shop located in the Hotel Albert. Her talent and proficiency in her skill brought about numerous customers and new relationships.

In 1950, her career path led her to meeting the love of her life, Frank Thomas Grindle. The two became acquainted while Grindle was working on the hair of Frank Grindle’s mother.
Grindle and her husband shared a strong bond with one another. Frank Grindle was involved in World War II, and after the war‘s end, he began working at Craig Air Force base, then Maxwell Air Force base in Montgomery, were he would commute back and forth to see his love.

Once her husband retired, she later did the same and settled beside him.

Ersie had a large, positivity impact on the many people that she met. Her immense impact rings true for Allyson Boozer, Grindle’s niece, as well.
Boozer has immense love and respect for her aunt, and cherishes the memories made between her, her aunt and their family.

As a gift, Ersie provided Boozer with her first bible.

“We have Christmas every year at my grandmother’s, and she [her aunt] would come walking through the front door. She would yell ‘Christmas gift’, in hopes of receiving a Christmas gift from anyone within the room,” Boozer said.

Boozer states that what she admires the most about her aunt is her constant happiness and caring nature.
“She has always been there and has always been a good person,” Boozer said.

“She took care of everyone she needed to take care of, her husband, nieces, nephews and her parents, too. She always tended to everyone.”