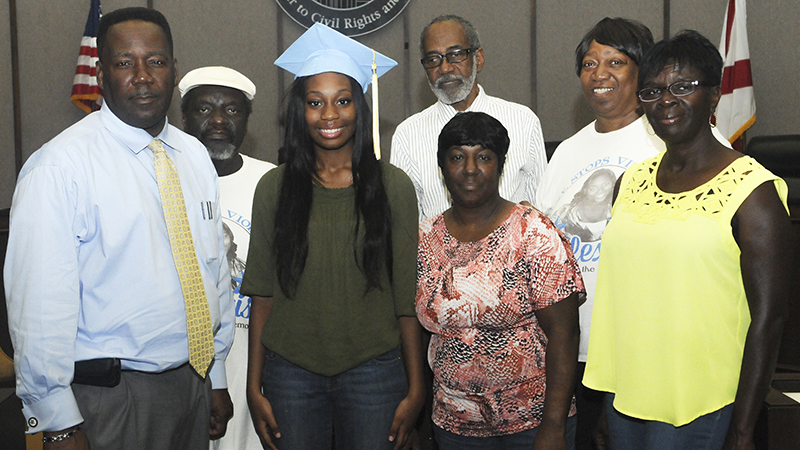 It was a bittersweet day at City Hall Friday, as Ashley McCovery received the Alexis Hunter scholarship.

Hunter, a straight A student at Selma High School, was robbed of her cellphone and murdered in December 2013 while walking with two friends.

She was loved by friends and family.

In an effort to remember her legacy, Selma City Council president Corey Bowie started the

Alexis Hunter Scholarship four years ago. He pledged to award a deserving student each year in her honor.

Family friend, and church member Frank Chestnut Sr. said Hunter was a respectful and smart young lady. He was happy to see a student that resembles some of those same qualities receive the scholarship.

Past recipients of the award received the honor through Gearing Up for College, however this year Bowie thought the recipient should be from the same ward Hunter lived in.

“This year, we just let the council person of the ward [choose the recipient],” Bowie said. “I felt it would be more indicative if you choose someone from Ward 7, the ward that Ms. Hunter resided in.”

Besides being a resident of Ward 7, the student also had to have a 2.0 GPA or higher.

Bowie said he is happy to continue awarding the students, because it is his way of honoring Hunter while making sure the education of local youth is a priority in the community.

“I will make sure Alexis lives [and her] light shines,” Bowie said. “I want to make sure her legacy is illuminated by another child going to college.”

Ward 7 councilwoman Jannie Thomas chose McCovery to receive the award because of her drive for excellence and her bright future.

“It makes me proud to see children in my community achieve something in life,” Thomas said.

Thomas said her ward is full of “community people” that care for each other, and she is happy to see a student from the community make something out of herself.

“I see potential in my community, and I am going to continue to do anything I can to help,” Thomas said.

She has watched McCovery grow up and she is proud of the lady she has become.

Joann Hunter-Walker, Hunter’s mother, said she and her family are grateful to see her daughter’s legacy live on through helping other young people.

“It felt good for them to think about [Alexis] and honor her,” Walker said. “[Bowie] said he was gonna do it as long as he was president, so it’s a wonderful feeling to have it continue.”

McCovery graduated last Wednesday from Selma High School, and was grateful when Thomas told her she would be this year’s recipient of the scholarship.

McCovery plans to attend Auburn in Montgomery in the fall, and major in Biology.

“I want to go to medical school so I can become an oncologist,” she said.

She hopes to one day find the cure for cancer.

Bowie said it’s the youth that make a difference in the world as well as the city. He said by investing in the youth’s education, you are investing in tomorrow’s success.

Law enforcement officers from multiple departments appreciated at the…