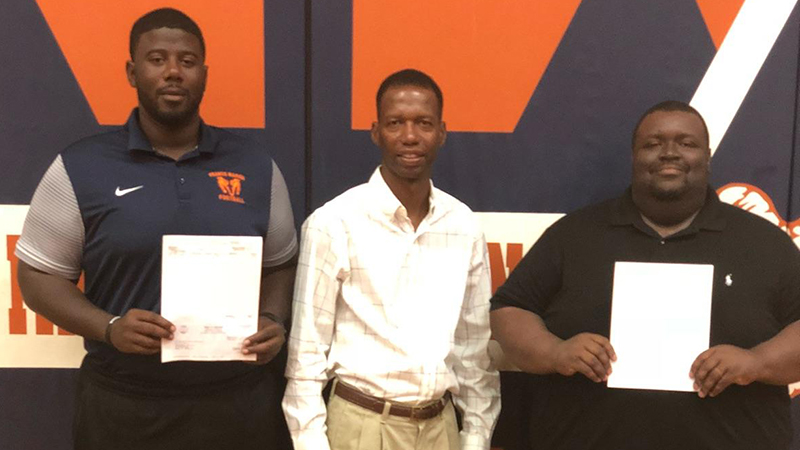 Each year, representatives are allocated a sum of money to delegate to a community service.

“This is part of what every legislator gets as a part of our community service grant money that we’re allocated out of the Educational Press Fund,” Howard said. “Every legislator does it a little differently when it comes to how they distribute that money, but I just keep a running list of people that request funds.”

Howard has been donating to Francis Marion and R.C. Hatch ever year he was in office since 2005.

“Ever since I’ve been elected, I’ve made an appropriation out of the community service grant money to both schools,” Howard said.

“We are very grateful that Rep. Howard was able to do that for us,” Griffin said. “It’s tough being in the Black Belt to be able to generate funds. This $2,500 donation is very good, and it helps us out.”

The Francis Marion Rams football team usually put on a number of small fundraisers throughout the year to help raise money for the program, but the sizable donation from Howard provided a much-welcomed boost to their efforts. The money will go towards getting more safety equipment for the players and helping the student athletes make trips to various camps around the state.

“We can never have too many helmets or shoulder pads, so we try to use the money for our camps and safety equipment,” Griffin said. “We’re grateful to have people who support us and what we’re trying to do with these young athletes.”

The Rams finished last season 4-9, but Griffin is optimistic about his senior heavy team going into the 2018 season. He was pleased with the results from spring practice and is looking forward to improving the Rams record again this season.

“Based on the spring, I think the program is going in the right direction,” he said.

The Rams and the R.C. Hatch Bobcats will face each other for the first game of the season on Aug. 31, in Uniontown, and the coaches invited Howard to attend the game.

“I had a great conversation with both coaches and they invited me to the game that they’re going to have,” Howard said. “I told them I would be there. I support student-athletes.”