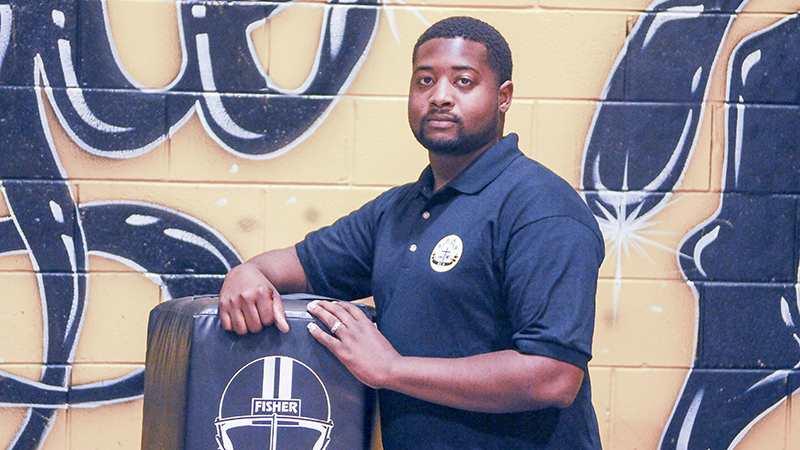 Ellwood Christian Academy started the spring semester without a new football coach to replace former head coach Mike Stokes who stepped down after seven games in 2017.

However, the school was able to find their next leader just in time for spring practice to start.

Catlin led the team through a two-week spring practice period before hitting the field for the first time during the Jamboree game at Memorial Stadium this past Friday night.

“It’s been a good two weeks so far,” Catlin said. “The kids are learning and we’re moving in the right direction.”

Before joining the Eagles, Catlin was the co-offensive coordinator for the Linden High School Patriots. In his six seasons with Linden, he also coached the linebackers.

In 2017, the Patriots offense averaged 35.1 points per game and finished the 2017 season with a 7-4 record. The Patriots score more than 40 points in six of their games last season, and made a playoff appearance. The last time Linden played ECA, the Patriots won 26-6 in 2015.

Catlin and the Eagles are both looking for fresh starts as the 2018 season approaches.

“It’s a good leadership role,” Catlin said. “I felt like Ellwood Christian was a good place to start. From my time at Linden when we played them, I always thought the effort and the players were here. They were just missing that extra key to getting over the hump.”

ECA football hasn’t recorded a win since its 32-6 victory over Lynn High School in September 2015.

On a short roster, the Eagles will need to find out who can step in for the veterans.

The Eagles took on the Notasulga Blue Devils for two quarters during the Jamboree, and were unable to get on the scoreboard. But they did hold a more experienced Blue Devils team to just 14 points.

ECA’s night was highlighted by a few strong defensive stops and a 20-yard run by its new quarterback Londarius Dean.

According to Catlin, the effort he was looking for showed up in the Jamboree scrimmage. The team will begin summer workouts in June, to begin preparing for the fall.

“In the regular season, we’re going to see teams just as tough as Notasulga,” Catlin said. “I want my team focused on getting better as players and individuals. It’s going to be a learning process throughout the whole summer, and these first two weeks haven’t even scratched the surface of what we’re going to do in the season.”

ECA principal Gary Crum brought Catlin in because he believed he was the right fit for the Eagles.

“We’re young and he’s young, so I figured that the program can grow along with him,” Crum said. “First of all, he’s a man of faith and a family man. I think he’s going to add something to the program on the field, but I think he’s going to make an excellent teacher as well. I have no doubt in my mind that we made the right decision, and I’m looking forward to it this fall.”