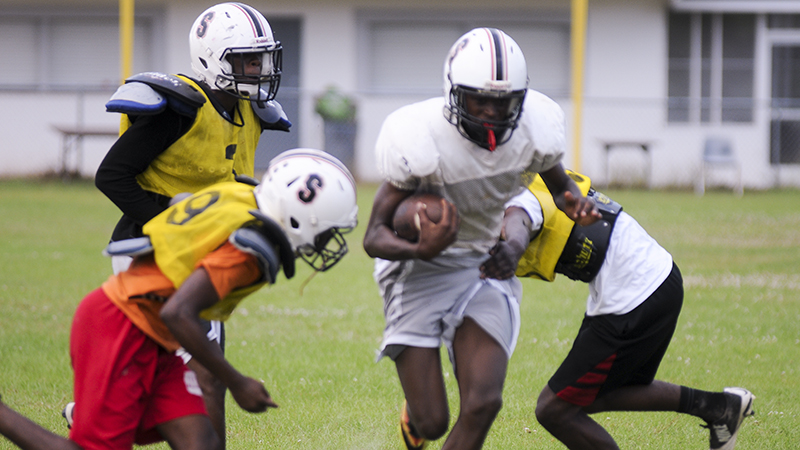 Southside’s Derrick Griffin breaks through an arm tackle during scrimmages at spring practice. The Panthers will travel to Hale County for its spring game Friday night at 7 p.m.

The Southside High School Panthers football team is in its final week of spring practice as it prepares for its spring game this Friday at Hale County.

The players were going full speed at Wednesday afternoon’s practice, as they scrimmaged against themselves.

Spring practice is usually where teams have to find out where they need to reload, but Southside finds itself in a fortunate position heading into the 2018 season.

“This will probably be our best team this year,” Panthers head football coach Daniel Flowers said. “We lost a big class last year, but we have a lot of guys that started as juniors and sophomores that are still here.”

Despite losing 18 seniors to graduation, Flowers is retaining several starters from the 2017 season.

“These are the same guys that have been playing with me the last few years,” Flowers said. “We’re not about to change the offense up. A few adjustments on techniques is all it takes.”

Not only will he still have 2017 Times-Journal Player of the Year Malik Johnson back at quarterback, but key players like receiver Derrick Griffin, defensive back Ernest Hatcher and linebacker Dashawn Pullom are returning as well.

Each of the returning players have the experience of winning three overtime games and making it to the first round of the playoffs, so the expectations for the 2018 team hasn’t been lowered.

During the spring period, Flowers has his team focused on fundamentals and improving the rushing game.

“This whole spring has been about running the football,” he said. “And we’re having good success with it.”

The ground game is where the Panthers have the most threats on the field. Johnson is an exciting dual-threat quarterback who will rack up plenty of rushing yards himself, but Southside has several running backs that can tote the rock as well.

“The key is the defensive line,” he said. “They have been playing some ball this whole spring. That’s a strength for us. I think we’re better this year in the trenches.”

The defense will also get back linebacker Trendarius Carter, who missed last season due to injury. Flowers is ready to have one of his top line backers back on the field to help lead the defense.

The Panthers will go on the road to face Hale County High School Friday at 7 p.m.