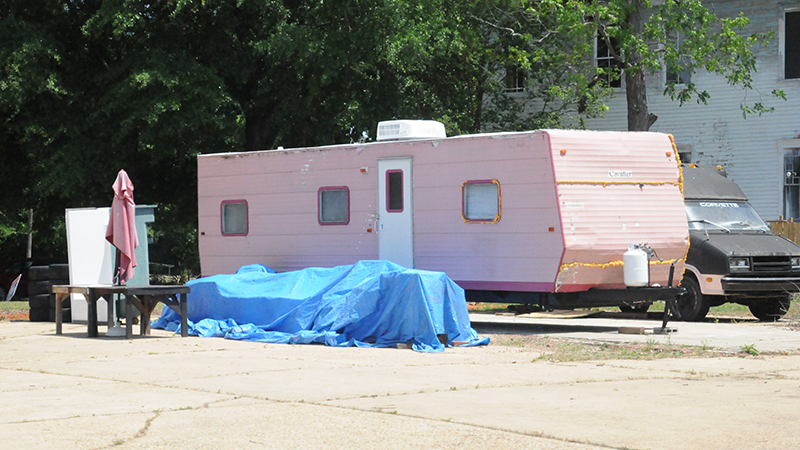 A business in town is selling tires and causing headaches for allegedly breaking multiple city code violations and irritating residents of Old Town.

Poor Boys is located on the corner of Tremont Street and J.L. Chestnut Boulevard. On the corner, the two trailers stand in the empty concrete lot with a sign reading the name of the business.

The man behind Poor Boys is Willie Jemison, who restores houses in Old Town. According to the Dallas County Tax and License Department, Jemison bought the land from Racetrac, Inc., which owns the Raceway gas station franchise, for $9,500 on April 13. Upon purchasing the land, Jemison began setting up his shop. The black trailer is spraypainted with phrases like “BBQ” and “T-shirts,” which confuses residents on what is truly sold there. When asked, Jemison said he strictly sells tires and restores Old Town houses.

This confusion has led to raised eyebrows and criticism for what Ward 3 Councilwoman Miah Jackson and Old Town residents say is multiple code infractions.

According to Jackson and former Ward 3 councilman Greg Bjelke, Jemison never got the business approved with the Historic Commission, which oversees matters such as new ventures on property in Old Town.

Furthermore, Jackson and others have repeatedly told Jemison he has to set up Poor Boys the right way, regardless if he owns the land or has a business license. Despite the multiple warnings, Poor Boys has not listened, and continues to increase its presence. Jackson told Jemison to have his business off the property by Friday due to the multiple violations with the city and Old Town. As of Saturday afternoon, the pink trailer was no longer on site, but the black trailer was still there.

“This is something that never should have gotten to first base,” Bjelke said. “I thought someone would take care of it, but now it has grown and grown into what it is now. He even has a sign out there now.”

One of the alleged violations is the color of the pink trailer. For structures such as homes and mobile homes in Old Town, the color pink must be approved.

“I can’t even paint my house pink, so you think they are going to allow a pink trailer right in the heart of Old Town?” Bjelke said. “I went in there asking to get a chain link fence for my backyard approved, and they laughed me out of the building. There is no way they are okay with this. It is unheard of.”

Another violation is the way the business operates itself. According to Bjelke and Jackson, it is believed that Jemison thinks he is allowed to sell tires just because a Raceway gas station was there previously. However, the concept of being “grandfathered” into a tire business because a gas station used to be there previously is not something that exists. Additionally, the black trailer that says “BBQ” and “T-shirts” on the sides incites belief that Jemison is in more than just the tire business, which is something he would also have to get approved by the Historic Commission and by the city.

When code violations such as these are broken, the governmental procedure would then be for the city’s code enforcement to follow up with a warning, a fine or the removal from the property.

Instead, according to Miah Jackson, code enforcement has not done anything about it. She says she has reached out to code enforcement multiple times, but nothing has ever been done about the situation.

According to Jackson, she called the code enforcement office and talked to a member of the department, who then told her “I feel you all are picking on him.”

“The city is not harassing him. The city is holding him accountable to comply with the ordinances,” Jackson said.

Multiple attempts to speak to Sean VanDiver and of Selma’s Code Enforcement Office were made, but no one could be reached for comment or a return call.

With Jemison noncompliant and code enforcement disregarding the situation, Bjelke says he and others are having to take action. In Bjelke’s words, he says he has a “plan’ for Poor Boys, but did not want to disclose details.

Jemison says he has a legal business license to operate Poor Boys. He did not say anything about selling other products other than tires.

It is unknown at this time whether legal action will be used to resolve the situation. Jackson said she just wants Jemison to comply with city ordinances and Old Town regulations the same as any other resident.