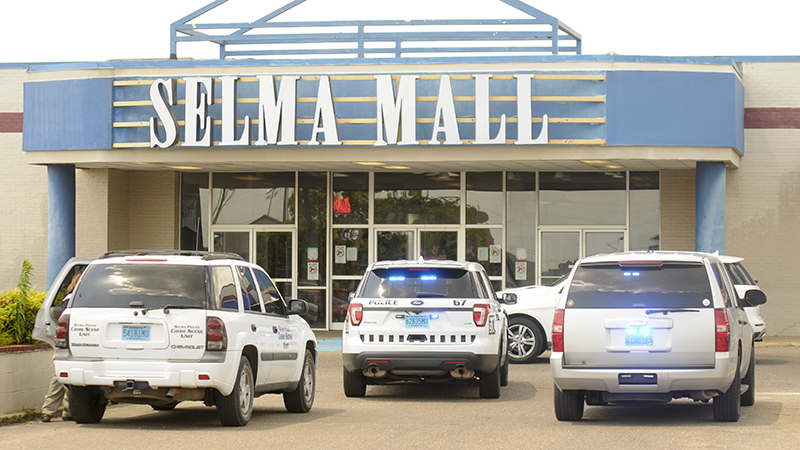 Shattered glass covered the floor of the Jewelry Center inside the Selma Mall Thursday afternoon after a group of men robbed the store.

No arrests have been made, and no suspects have been identified as of Thursday afternoon.

According to Selma Police Chief Spencer Collier, two to three men entered the store and asked to see some of the jewelry.

“They asked to look as some jewelry, and according to the owner their policy is to ask for a driver’s license. He pulled out a wad of cash and said he didn’t need a driver’s license,” Collier said. “One of them had a long rod behind his back, and he began busting the cabinets.”

Jasper Holmes, who sells leather belts at a kiosk in the mall just outside of the jewelry store, was woken up by the robbery.

“I was here asleep, and I heard something. Bam, bam, bam, and then when she hollered, I woke up,” Holmes said.
“A guy was running down through that way with what looked like an armful of stuff. When I got up and came over there, they were gone, and I saw all that stuff on the floor.”

Many people at the mall thought shots were fired, but no guns were involved.

Collier said the sound of the glass shattering was confused for gunfire.

“I guess with the sound of the cabinets shattering, the call went out as an active shooter, shots fired, but no guns were used and no one was shot,” Collier said.

With no suspects identified, Collier said the investigation continues to find out who the perpetrators are.

“There are no security cameras in the mall. One of the kiosk stores had a camera that was pointing down the hall, but it was not operational, so there’s no video,” Collier said.

If identified and arrested, the suspects will face first-degree robbery charges.

“Anytime you use any type of force in the commission of a theft is robbery,” Collier said.

Anyone with information is asked to call the Selma Police Department.