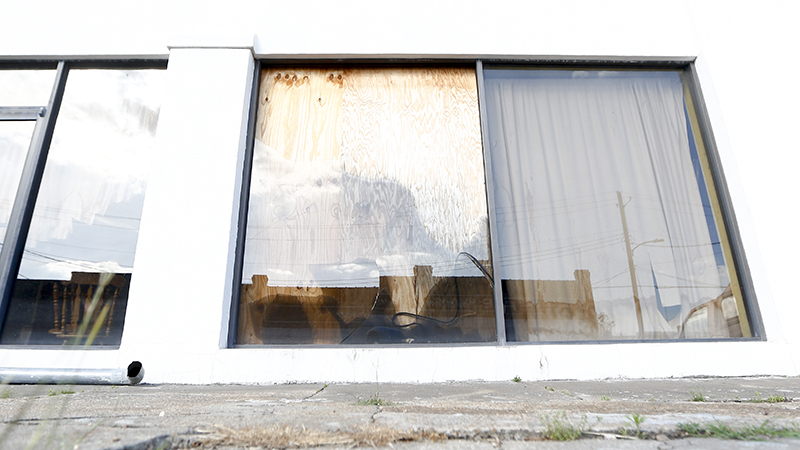 These windows across from Charlie “Tin Man” Lucas’ studio on Lauderdale Street will soon be filled with art. (Blake Deshazo | Times-Journal)

Charlie “Tin Man” Lucas is tired of seeing windows boarded up with plywood throughout Selma.

To fix it, he’s come up with a community art project to give people something beautiful to look at instead of plain plywood.

“What we’re trying to do is show people that come into Selma that even if the building is empty, we have something to show you,” Lucas said.

“There’s nothing but just plywood up there anyway, so whatever we put up there, it’s going to make you look up there. All we’re going to do is put a piece of plywood over that to enhance that.”

The vision came to Lucas one day when he had a group of students at his studio on Lauderdale Street. One student pointed out the window and asked Lucas what the building across the street with boarded up windows was.

“I said it’s a cleaners,” Lucas recalled. “He said it didn’t look like a cleaners. So that’s when everything went to rolling. I said why not just put something up in these windows. You’ve got plywood in them anyway. This will just sit right on top of the old plywood. Two screws [and] you’re done with them.”

Once Lucas started sharing his idea, others joined in to make it happen. Clay Carmichael, president of Main Street Selma, and A.C. Reeves, an artist and redeveloper, jumped on board.

“The idea is to give people a good feeling about downtown,” Carmichael said. “The more people you get downtown for various things, the more they shop and the stronger your downtown gets.”

Carmichael said a grant was awarded for the project through the National Endowment for the Arts and Alabama State Council on the Arts. Fuller Building Supply and Summerlin Hardware have donated plywood and paint to the project.

“This whole thing to me has been so magically done. I lay down some nights and say, oh God, is this truly the way you want me to do this here with all of these people involved, and then something inside of me says yes,” Lucas said with a smile.

“This to me, is like herding a nice herd of people in and seeing the beauty come out of them. It’s going to come out in so many different ways.”

So far, the plywood for the first part of the project has been completed. Part one is the side of the Selma One Hour Cleaners building. The boards have been cut and primed.

“What we’re going to do here is we’re going to make this look like a clothesline with clothes hanging on it, and when you get to the last part of it, you’re going to see these clothes that are ironed and pressed and looking nice to wear,” Lucas said.

“It’s kind of like taking a coin and flipping it on the other side. People see the coin, but they don’t know what the other side of it looks like unless you flip it over.”

This weekend, Lucas is hoping for a great turnout at his studio to help the project get to the next step, which is attaching boards to the back of the plywood so it won’t buckle, designing and painting.

“We’re going to try to get some of that done, and then in the midst of that we might even start on the design of it. It depends on how many people are here,” Lucas said.

“We’ll find something for them to do. They don’t have to just get their hands dirty with paint on it. We’re looking for ideas too,” Lucas said. “This is a whole big salad, and we want everything to be in it. That means everyone that wants to come and participate in it.”

The next two steps are windows on the side of the Harmony Club and another building. The plan is to put art in more than 20 windows, and Lucas hopes it grows from there.

“Once everybody goes to seeing this here … it might influence other ones to do something because I’m sick of looking at windows covered up with plywood with nothing else there,” Lucas said. “We can do better than that. I know we can.”