Selma High football gets back into pads for spring 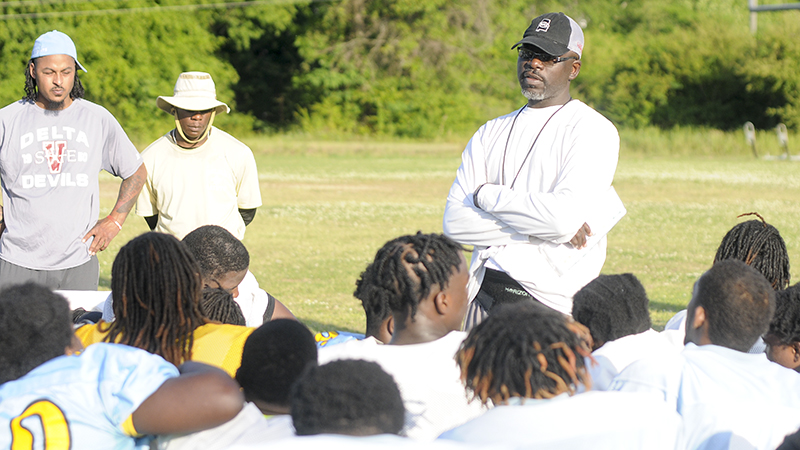 The Selma High Saints football team was back on the practice field in helmets and shoulder pads this week for spring practice.

Saints head coach Christopher Raymond has been ready to get practice underway, and assess what his 2018 roster is going to look like.

“We’re excited,” Raymond said. “We’ve got about 60 kids out here and we’re just trying to get better every day.”

Fortunately for him, several of his key players from last season are back and ready to improve on last season.

“It’s their time to shine,” Raymond said. “We want to improve on what we did last year.”

In 2017, the Saints went 4-6 in their first year under Raymond’s leadership. An improvement over the 1-9 2016 season. The Saints have its quarterback, lead running back and primary receiver coming back from all-county worthy seasons.

Tyreshon Freeman threw for 2,134 yards with 21 touchdowns and 13 interceptions. Running back Amarian “Hulk” Molette rushed for 1,034 yards and 10 touchdowns. Gabriel Wade caught 12 touchdown passes and racked up 783 receiving yards last season. Freeman, Molette and Wade were all sophomores last season, and are looking to step up their game in their junior year.

Raymond had spring practice running as if the team was already in mid-September. Dropped passes were penalized with push-ups. Walking on the field earned players a running trip around the field. Even in shorts, coaches were demanding 100 percent effort from the team.

The team went through position drills, tackling drills and a seven-on-seven period before ending the day with conditioning.

“We want to coach them up right and have them hustle on and off the field,” Raymond said. “We want to be a well-conditioned team.”

The team is in high spirits, and players like Molette are anxiously waiting for football season to come back around.

“We’re feeling great, and we’re ready for the season to start,” he said.

The Saints have another week of practice before the spring game next Friday against Carver High School at Bloch Park at 7 p.m. Wade and his teammates are hungry for that first win to close out spring practice.