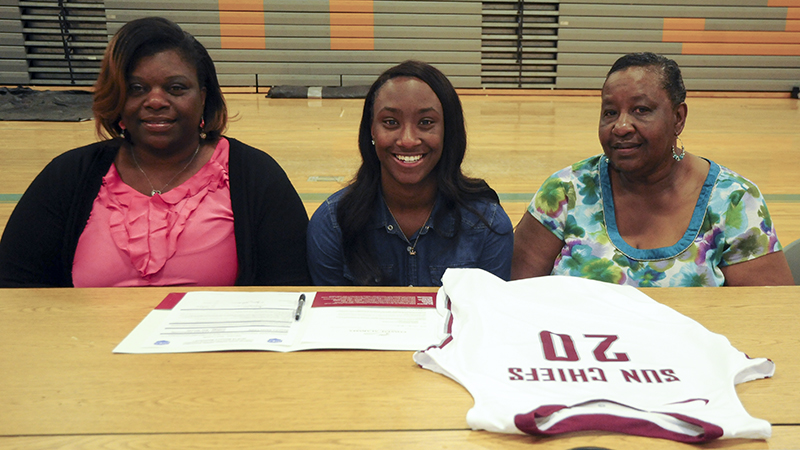 Selma High senior point guard Kynadra Lewis (center) sits between her mother Lekeita Lewis (left) and her grandmother Lula Lewis in the school gymnasium as she signed her letter of intent to play basketball at Coastal Alabama Community College South.

Lewis, who received college interest from schools like Lawson State and Wallace Community College, earned a scholarship from Coastal Alabama that will cover her tuition, books and fees for the upcoming fall and spring semester. 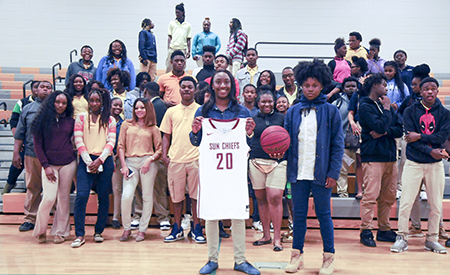 Selma High senior Kynadra Lewis holds up her Coastal Alabama South SunChiefs jersey next to her Lady Saints teammate Na’Quashia Smith while her classmates supported her from the stands on her signing day.

At the scorer’s table, Lewis was surrounded by her family and coaches while her teammates and classmates were in the stands to support her.

“They’ve been supporting me since I was in middle school,” Lewis said. “It was great to have them see me get to the next journey. It’s just the beginning.”

“I’m just so excited my baby is stepping out into the real world,” Lekeita said. “I felt so much joy because this has been something she’s been doing since she was young.”

Lewis signed her letter of intent at half-court in the gym where she spent the last five years developing under coach Harris.

During her time with the Lady Saints, Lewis has been an area champion, region champion and two-time Times-Journal first-team all-county selection.

“I owe it all to coach Harris,” Kynadra said. “He brought me up and saw the potential in me. I’ve been working hard with him, and he’s made me a better athlete and a better student.”

She’s gone through several runs into the playoffs and turned into the team leader that Harris knew she could be.

“She’s done a good job for us,” Harris said. “She’s a Selma High jewel, and she made some great things happen during her tenure here.”

In her senior season, Lewis averaged 14.3 points per game and 4.6 assists per game. On the defensive end, she had 170 steals.

The Lady Saints went 23-6 this past season, and Lewis’ play was a key reason why the team was so successful. 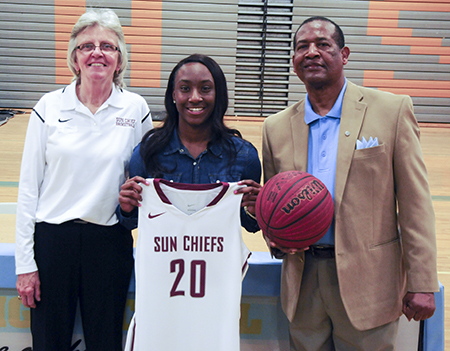 “My main focus this year was signing a point guard,” Pitts said. “I know coach Harris does a great job preparing these young ladies. KK (Kynadra) works very hard, and I think she’ll do a good job for us.”

According to Pitts, Kynadra’s speed, intensity and durability made her a good fit for her program. She liked that Kynadra is the type of guard that can push the ball, score and play good defense.

“I’m going to put the ball in her hands,” Pitts said. “I don’t have a point guard coming back, so I’m expecting her to be able to pick it up and go with it.”

Pitts found what she was looking for and went the extra-mile to recruit Lewis for her team. Not only did she request game tape on Kynadra, but Pitts came up to Selma to see her recruit in action.

“Coach Pitts didn’t sit back and ask for film,” Harris said. “She went to see what she got.”

The extra-effort by Pitts, who is a Selma native herself, impressed Lewis just as much as her official visit did.

“[Pitts] made me feel like I could be comfortable around her,” Kynadra said. “She actually came all the way down to Selma just to tell me she wanted to offer me a scholarship, and she took me back with her too.”

Pitts brought Kynadra down to the Bay Minette campus, so she could get a feel for her new college environment.

“It was great, and everybody made me feel like I was at home,” Kynadra said. “She’s a very special lady, and I knew that when she came here just to give me that scholarship.”

Lewis will be joining her former teammate Jacquetta Dailey, who will be a sophomore guard for the Sun Chiefs this upcoming season.

During her campus visit, she was able to get some advice for preparing for college.

“It’s going to be great to play with my teammate down there,” she said.

Kynadra plans on majoring in physical therapy while she’s in school. Her personal experience receiving treatment that helped her stay on the court sparked her interest in pursuing it as a field of study.

“I know the physical therapy helped me when I get hurt, so I want to help all the other kids and athletes.”