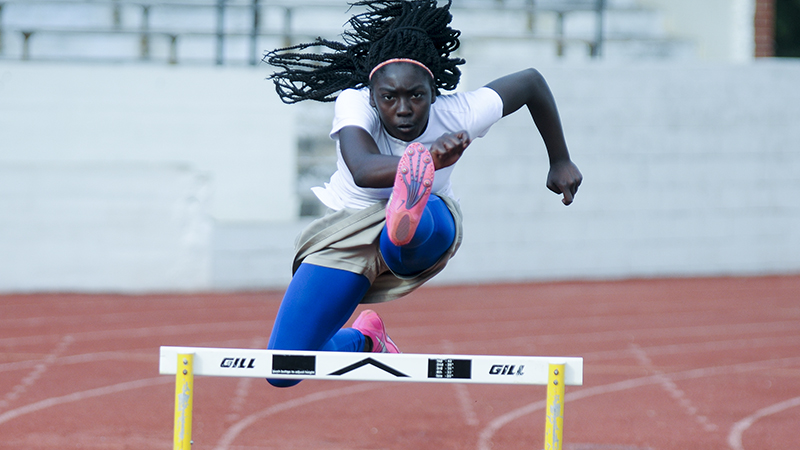 Ellwood Christian eighth-grader Rashni Walker practices on the hurdles at Bloch Park Tuesday afternoon as she prepares for the AHSAA Class 1A state championship meet in Cullman this weekend.

Ellwood Christian Academy, Keith, Selma and Southside each had athletes perform well enough at their respective qualifying sectional meet to advance to the state championship.

ECA’s two athletes, Malachi Walker and Rashni Walker, had a strong showing at their sectional meet at Paul Bryant High School in Tuscaloosa this past weekend.

The Walker’s next stop will be in Cullman this weekend, where the 1A, 2A and 3A schools will have their state championship meet.

They will compete in the same events as they did at the sectional meet, except Malachi will add the high jump to his list of events.

Selma High is headed to Gulf Shores Wednesday morning, and will be represented by Broderick Tripp and Keloni Rudolph in the 6A events.

“They are throwing the best they’ve ever thrown all year,” Saints head coach Katasha Turner said. “Both of them put it all on the line when it came to the throwing events that we do.”

Both will be competing in the shot put, but Tripp also qualified to compete in the boys discus event. Throughout the season, Tripp has been topping his personal best after each meet. At sectionals, Tripp’s 43-foot shot put throw was good enough for sixth place and earned him a spot at state.

“I was just really excited because I had never been to state before,” he said.

The trip will be an extra bonus for Rudolph. The senior shot put thrower has never been to the beach before, so she’ll have two new experiences all in the same weekend.

Rudolph spent the majority of the season hitting her same personal best, but at the sectional meet in Tuscaloosa, she created a new personal best with a 31-08 throw. The fourth-place finish qualified her for the state meet. 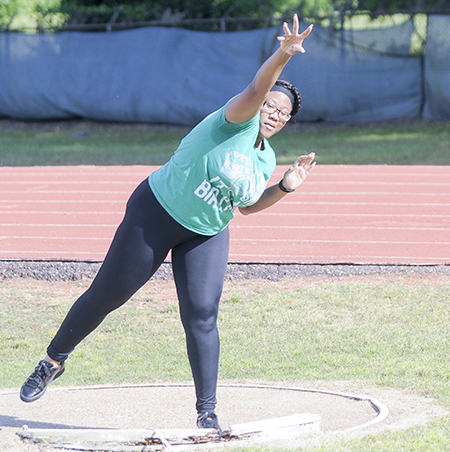 “I was shocked when I got qualified,” she said. “I’ve been getting a certain PR the whole season, and when I got to sectionals it was like ‘I threw that far?’”

The Southside Panthers, who will be in Cullman competing against the 3A competition, qualified for the 4-by-400-meter relay and the shot put.

At their sectional meet in Brewton this past weekend, the relay team completed the 4-by-400 in 3:54.60. The eleventh-place finish was good enough to get the Panthers an opportunity to compete at the state meet in Cullman.

The relay team is a mix of new and experienced runners, but the whole team is focused on bringing their best efforts to the state meet. Coleman, who qualified for state in his sophomore season, has already let his teammates know that the competition at the state meet won’t give them any slack.

“It’s a blessing and I want to thank God for allowing us to have this opportunity,” Thomas said. “This group is passionate, and we really want it. All of us are seniors, so we’ve come together as a family. We’re going to go out there with maximum effort and execute.”

Panthers shot put thrower Dashawn Pullom made a 39-05 throw at sectionals to qualify for the state meet.