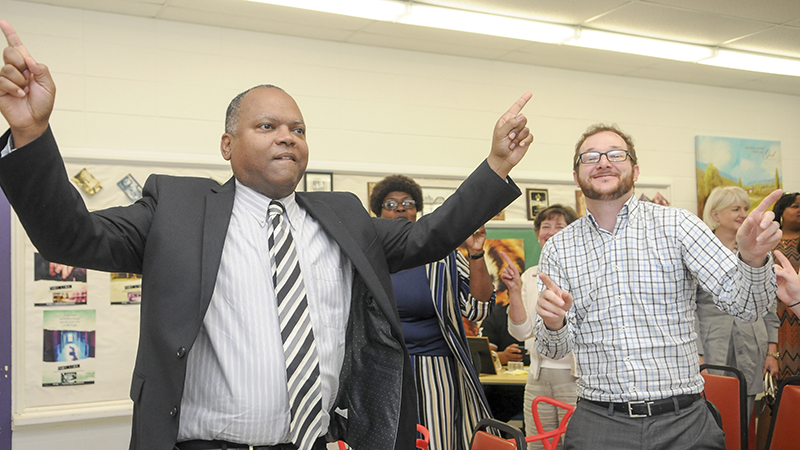 Drug Free Communities of Dallas County showed thanks Tuesday to the many ‘hope dealers’ that help the organization spread its mission of saying nope to dope.

Jerria Martin, executive director of DFC, invited law enforcement officers, fire fighters, educators and many more to HOPE Academy Tuesday and treated them to lunch and a token of their appreciation, a 2018 Hope Dealer Award.

“It’s awesome to see the community come together to support this vision, this initiative. It just feels so good. I’m definitely moved,” Martin said. “I was almost in tears.”

During the awards banquet, Martin discussed some of the projects over the last school year.

“The first year was more about the community coming together, and the adults were making most of our big Decisions. But this year we focused on our junior hope dealers,” Martin said. “They were the brains behind everything that we did this year.”

Junior hope dealers are students at schools in Selma and Dallas County, who encourage others to be drug free.

Martin explained the DFC’s “Hooked on Hope Drug Free Zone” yard sign campaign, as well as posters that were placed in each store in Selma and Dallas County that sells alcohol and tobacco to help ID people.

But one of the biggest projects was the “Say Nope to Dope” music video, which now has more than 110,000 views, according to Martin. She said the song and video was an idea the junior hope dealers came up with, and now it’s catching people’s attention.

Drug Free Communities of Dallas County is a coalition to fight substance abuse. It is funded by a federal grant.

“When you look at it, drugs are at the heart of almost every issue in Selma,” Martin said.

Martin said she has seen the success of the program over the last year and a half. More kids have taken on the task of becoming junior hope dealers in their schools, and she is hoping to continue to see that growth.

“What started off small as a 10-person group has now expanded to 50-60. I’m sure next year we’ll see it increase to 100 kids per school who are junior hope dealers,” Martin said.

“When they feel like they’re a part of something and have a hand in something, it’s going to encourage them. It’s going to push them to want to make a difference in the community.”

This summer, she is planning on taking Drug Free Communities on a tour to different summer camps to speak to children about being drug and alcohol free. Anyone interested in having them come speak can call Martin at (334) 327-0706.