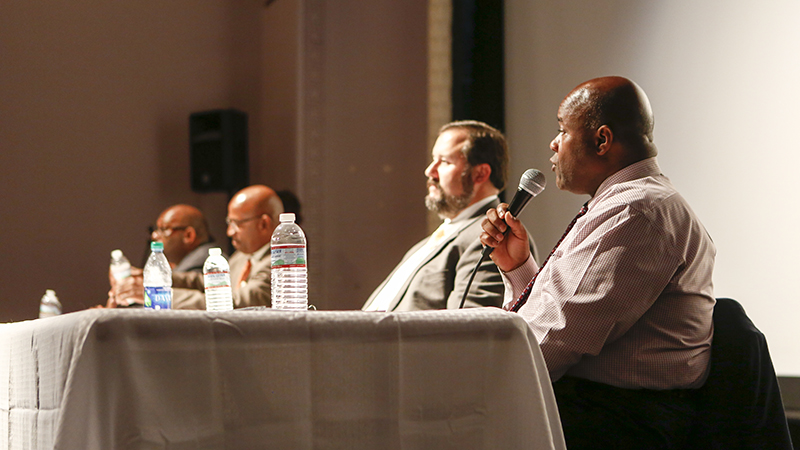 A candidates’ forum open to all members of the public for the offices of Dallas County probate judge and circuit clerk was held at the Performing Arts Center Monday night.

The forum comes in the wake of the primary election on June 5.

All candidates are seeking to represent the Democratic party.

Hosted by the Coalition of Concerned Families (CCF), the forum provides the public with an opportunity to receive more information about each candidate and their qualifications.

The forum was not a debate and was moderated by CCF president Jasmine Pritchett.

The two candidates for circuit clerk present at the forum were Lynnetthia Robinson and Christmas Green-Williams.

The five candidates for probate judge present at the forum when it started were Robert Green, Jimmy Nunn, Nick Switzer, Henry Moore and Clifford Hunter. A sixth candidate, Franklin Fortier, showed up late to the forum. Fortier claims he did not receive an invite to the forum. The forum was announced on the radio, and an article published in the Times-Journal leading up to the event. Pritchett said she also sent out a mass email to multiple media outlets and all candidates.

-In your opinion, what is the most pressing issue in Dallas County, and how will you address this issue?

-In your official capacity of circuit clerk or probate judge, where will you lead Dallas County in the next four to six years- and how? Tell us what to look for at the end of your term.

Each candidate was given a set time to answer these questions, provide their introductions and conclusions and to respond to audience-addressed questions. Pritchett explained the importance of having both audience-based questions and questions thought of beforehand.

“Sometimes the public does not get all the information they need from the candidates. We want to drive specific information that we are looking for,” Pritchett said.

“We want the public to learn what the candidates consider most important to move Selma-Dallas County forward.”

The event kicked off with the two candidates for circuit clerkt going first.

After introductions from Green-Williams and Robinson, they dove into the issues they viewed as important.

For Robinson, she emphasized the importance of accountability and transparency. She noted technological issues that have potential to hurt the day-to-day operations, such as alleged problems with the phone. For Green, she vowed to be an effective facilitator of public services.

“I am working on figuring out what I don’t know, as well as implementing what I do know,” Green said. “Ideally, the office is supposed to serve as the administrative arm.”

The forum for Dallas County probate judge featured five candidates trying to win the support of the audience and get their message to the people. With all five of them up on the stage at the same time, each had to take turns addressing what they viewed as important.

When asked by Pritchett about the number-one most pressing issue facing Dallas County, each candidate gave a different answer.

Nunn said that crime is the most important issue facing the county. He said that the amount of people with guns in the city puts all of its residents at risk.

Green said that proper funding of the school system is necessary for the sustenance of the county. He remarked that the half-cent sales tax that died in the Alabama House of Representatives put a strain on fair and suitable funding of certain schools.

Switzer said that infrastructure is the biggest concern facing Selma-Dallas County because of the economic benefits he believes the residents need.

“If we want business to come in here, we have to fix the infrastructure,” Switzer said. “I want to fix the issues with the roads permanently.”

-Hunter believes that career building and effective public servants are needed in this area. He has dedicated much of his time to helping students in the Selma-Dallas County area find a job or a technical school to attend. He also passionately proclaimed that he is a man of his word and of action.

Moore believes the receiving of a quality education is the most pressing issue facing the Area. He said something must be done to better prepare the students for the future.

Pritchett, who says the forums usually go over smoothly, did not have to interrupt any of the candidates for rude audience members or hostility between candidates.

All candidates were allowed to bring supporters, signs, shirts and other campaign tools to the event. This included family, such as the parents of Lynnethia Robinson, who wanted to show support for their daughter during her run for circuit clerk. Her father, Leonard Robinson, was happy to see her doing something she has always wanted to do with her campaign. As June 5 gets closer with each passing day, more forums and political events will be scheduled for the public.