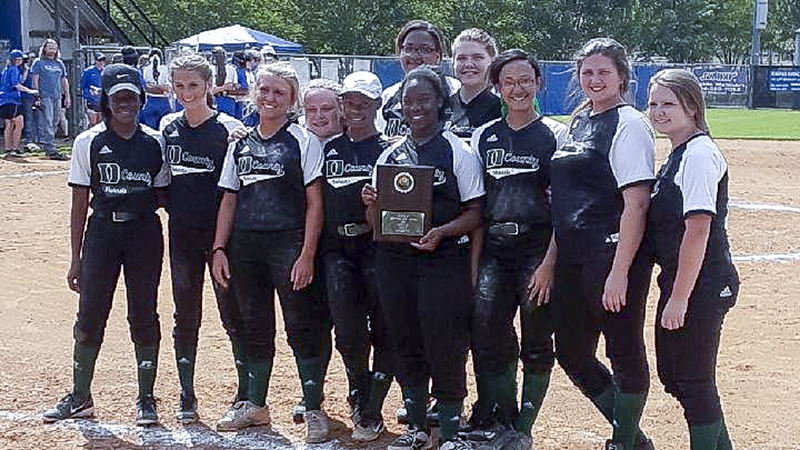 The Dallas County Lady Hornets softball team was short-handed going into the area tournament Friday morning, but they still managed to win enough games to be tournament runner-ups.

The Lady Hornets were the second seed in the tournament, so they had the 9 a.m. game against Central Tuscaloosa to begin a four-game day.

Dallas County picked up nine runs in the first inning, and went on to defeat Central Tuscaloosa 17-2 in the first game.

The Lady Hornets primary pitcher Dajah Thrash wasn’t available, but eighth-grader Anna Grace Small stepped up and had a great day on the mound. She struck out four batters and only allowed two hits in the win.

“Thrash is our No. 1, and she’s probably one of the better ones in the whole county in my opinion,” Denson said. “Small was pretty consistent, and she’s thrown in more games than the other pitchers. We kind of leaned on her.”

After winning game one, Dallas County had to face top-seeded Demopolis for game two. Demopolis was undefeated in regular season area games, and that continued through the area tournament.

Dallas County leadoff hitter Keyondra Fletcher started the game off with a single, but she was the only run that came across the plate. Sherilyn Briggins was the only other Lady Hornet to reach base safely in the game two loss.

The area tournament is a double elimination tournament, and the top two teams advance to Troy for the regional tournament.

In the do-or-die game three, the Lady Hornets defeated Central Tuscaloosa 15-1 to keep their playoff run alive. Small was the winning pitcher for game three as well.

Fletcher went 3 for 3 with two triples and four runs scored. Throughout the area tournament, Fletcher had six hits and touched home plate a total of eight times.

The Lady Hornets avoided elimination, but were unable to survive its fourth game of the day in the 15-0 loss to Demopolis in the area tournament championship game.

The team only went through the lineup once, as Demopolis was able to close the game after three innings.

Despite not winning the area championship, the second-place finish was good enough to secure the team a spot in the regional tournament Thursday, May 10 in Troy.

“It’s going to be really exciting for the girls to go and compete against that competition where everyone is as good as Demopolis,” Denson said. “It’ll be a huge challenge. Thinking back, eight of the last nine years Dallas County has made it to the regional tournament. This is something we look forward to.”