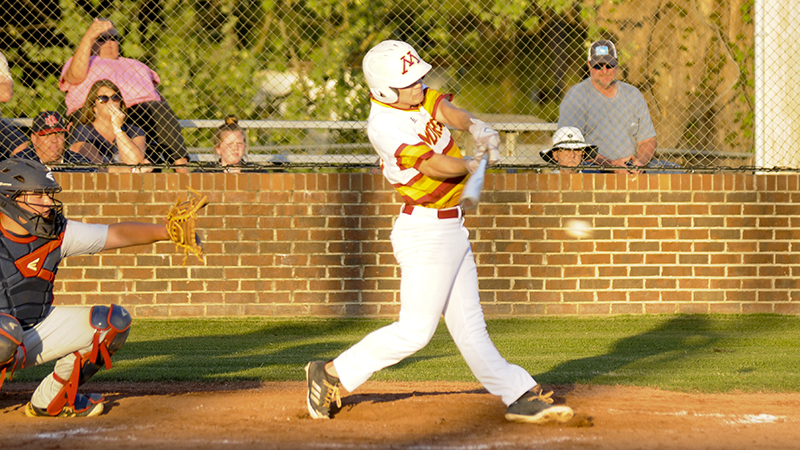 Morgan Academy’s Brayton Brown gets a hit in the Senators win over Fort Dale Academy earlier this month.

The rain Thursday morning pushed back the second round of the AISA baseball playoff series between the Morgan Academy Senators and the Glenwood School Gators to Friday.

“We were preparing to play [Thursday],” Morgan Academy head coach Seth Currie said. “It’s just more time for us to keep our guys locked-in and focused on the task at hand.”

The Senators used their extra day off to get in a few swings to keep their bats hot heading into a series against the AISA defending state champs.

The Gators ended their season with a 33-6 record, and earned the first-round bye for the AISA playoffs.

“They’re historically a very good team,” Currie said. “It’s going to be fun baseball to watch. It’s going to be a true, state championship-like series for us and them. I think most people in the state would agree that the winner of this series is going to have an opportunity to go on to win a state title.”

Morgan Academy has rebounded from a rough start to the season, which included a 13-game losing streak and waiting for key players to return from injury.

“When you go on a 13-game losing streak, most kids would shut down and they’ve done the exact opposite of that,” Currie said.

But the team turned their season around after its spring break tournament at the Aggie Classic in Pensacola, Florida.

“Our whole season got turned around that week,” Currie said. “We found out that we were good enough to beat good teams, and that’s what it took. It was a confidence boost for us.”

Heading into the playoffs, the Senators had won 10 of their last 11 games and swept Lakeside Academy in the first round of the AISA playoffs. As the No. 3 seed, the Senators had to go on the road for a best of three series with Lakeside.

“We went down there and wanted to take care of business on the first day,” Currie said. “We just competed, and that’s really what got us through that. We went over there with a bit of a chip on our shoulder trying to prove to people that we belong in the playoff run.”

The Senators defeated Lakeside 7-4 in game one, and took game two 6-4 to end the series and advance.

“We’ve definitely gotten hot at the right time,” he said. “They’ve showed a lot of resilience and dealt with a lot of adversity throughout the year, and we’ve gotten through it to show our true potential.”

The three-game series against the Gators will determine who moves on to play the winner of Edgewood and Monroe in round three. First pitch for game one is at 3:30 p.m. at Glenwood School in Smiths Station.

“I think it’s going to be a special time for these kids,” Currie said. “I continue to ask my guys if they’re ready, and from the lowest man on the totem pole to the top I get a pretty clear and straight-forward answer yes. I can’t argue their focus at this point. I think it’s just time for us to go over there, play and make our potential a reality.”