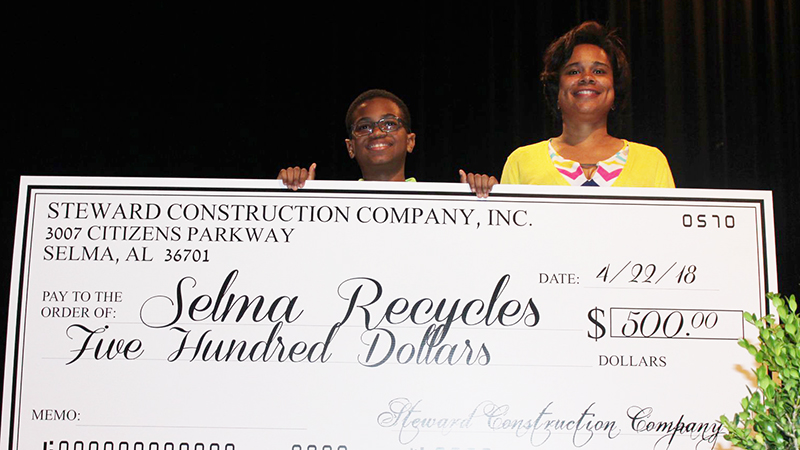 Caleb Smith and Selma City Councilwoman Miah Jackson pose for a check for $500 from Steward Construction for Smith’s Selma Recycles project. The check was awarded to Smith Sunday at School of Discovery during an Earth Day celebration. (Submitted Photo)

Steward Construction Co. has stepped up with the donation of $500 to help an 11-year-old who has dedicated his daily efforts to his recycling program,  Selma Recycles.

Caleb Smith and his mother, Crystal, have been running Selma Recycles ever since Caleb was the recipient of a public works grant from Disney last year. After receiving the grant money, the Smiths immediately went to work educating the community about what they wish to accomplish. This money allowed Caleb to set up recycling bins in schools and to host multiple drop-off dates where residents can donate plastic, and later cardboard, to be recycled rather than wasted.

Ward 3 Councilwoman Miah Jackson saw what Caleb was about and wanted to everything she could to help. Somebody who cares about the environment herself, sponsoring events such as “Litter Free in Ward 3,” Crystal says Miah took an interest from the beginning.

While the grant was beneficial at getting the project off the ground, Crystal and Caleb knew they needed to plan ahead in order keep their operations flowing.

Crystal says she has been amazed at how the community has rallied behind Caleb by supporting his efforts on social media and coming to the drop-off dates. However, with Disney’s money running low, they needed someone to support them financially. Steward Construction Company, run by Darrell Steward, were more than happy to provide financial assistance totaling $500.

With Selma’s recycling program currently docile, Caleb saw a public service that required someone to take action. Steward was ready for a chance to help someone trying to do everything he can to benefit the town he lives in.

“I have been paying attention to Caleb for a while now. If our youth could turn out like him, I sure would feel a lot better. He is a great youngin,” Steward said. “Kudos to his parents because you can tell there is good raising in his life. He speaks in public very well, and he really is a good example for the community.”

The $500 will empower the Smiths and Selma Recycles to keep their operations moving forward. According to the Smiths, the money will go towards the purchasing of larger-sized bins for schools and the transport of recyclable material to Montgomery.

Crystal says she has been overwhelmed with the amount of support Caleb has received since he first started this program. The community has reached out to support him as well, admiring a kid who works hard to benefit the city.

“We are so excited to receive the donation from Steward Construction. I can see the excitement on Caleb’s face,” Crystal said. “We are glad there are people like him in this community. Steward really admired what Caleb was doing. He appreciates his work in Selma.”

Now that the word is out about Selma Recycles, the Smiths are working to keep the community engaged and the positive momentum going. According to the Smiths, the next step is the implementation of their new recycling bins and the continuance of their drop-off dates.

The next Selma Recycles drop-off date will be Sunday, May 13 followed by another on May 27 at Bloch Park from 1-3 p.m.

With the money in the hands of the Smiths, Steward said there is one reason why he wanted them to have this money.

“I gave him this money to keep him inspired. I did it so he can keep doing what he is doing and stay on the track he is on.”

Roots and Wings Show to open at ArtsRevive Friday