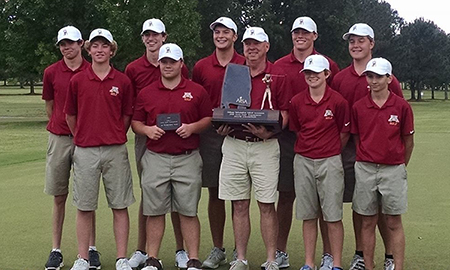 The real-time scoring updates weren’t available this year at the 2018 AISA golf state championship in Troy, so no one knew who was in the lead as the final pairings of golfers played their remaining holes Tuesday afternoon.

The Morgan Academy Senators opened round two three strokes behind their closest competitor in Glenwood School, and Senators head coach Ira Wagoner had no idea where his team stood until the final Morgan Academy golfer Thomas Morris turned in his scorecard.

“We really didn’t know until Thomas handed the guy his card,” Wagoner said. “It was very close. I didn’t realize until Thomas came in that we had won.”

In a field of 21 teams, with more than 70 golfers competing, the Senators golf team won the AISA state championship (605) with a seven-stroke lead over Glenwood School (612) at the Troy Country Club.

“We’re just happy,” Wagoner said. “I think everybody in a couple of days will realize what they did.”

The Senators won 10 tournaments this season, and had an 113-3 overall record this season. “There was really only one other team we thought we’d really have to beat, which was the Glenwood School, who had beaten us in two matches this year,” Wagoner said. “They’re a good team, and we knew that’s who we’d have to beat.”

Teams went into the first round of play Monday morning without a practice round because of the poor weather conditions on Sunday. After the end of the first round, the Senators had a team score of 307.

The team played the second round much better, and got the benefit of a strong performance by Arrington Mooney to help the team overtake the Glenwood School.

“Thomas Morris and Jones Free have been our best players through the year, and played very well the last two days,” Wagoner said. “Arrington Mooney, who’s playing in the No. 5 position, stepped up and had the third best score of our team [Tuesday], which really helped us get over the top and win.”

Morris, an all-tournament selection, had the third best score of the tournament with a 73 in the first-round and a 68 in the second-round. He shot -3 Tuesday morning, and had an individual total score of 141.

Mooney, who has the highest individual score (86) on the team after the first round, turned it around Tuesday and finished with the third best score in the second round (78).

The team effort to improve their scores in the final round of the championship tournament was the difference in coming back from a tough first day.

“It’s been a combination of all five of them for our success,” Wagoner said. “If we didn’t have Gus Colvin and Arrington play good today, then we don’t win.”

Morgan Academy had nine players, the most players of any team, qualify to compete in the state championship. Morris, Free, Colvin, Mooney and David Cothran earned the top-five spots because of their strong play during the season.

When it was time to accept the team trophy, the Senators selected Roberts, the team’s only senior to receive it.

“Every year, for the last four years, we’ve only had one senior and they always get elected team captain,” Wagoner said. “Even though he wasn’t in the top-five, I asked who they wanted to go get the trophy and they all said Colton. So, that made me feel good.”

“This spring has been great,” Morgan Academy athletic director Josh Thacker said. “As far as golf goes, all year long they’ve been dominating. They faced a little bit of adversity this week, but at the same time those guys are extremely good at what they do and coach Wagoner does a fantastic job with them.”