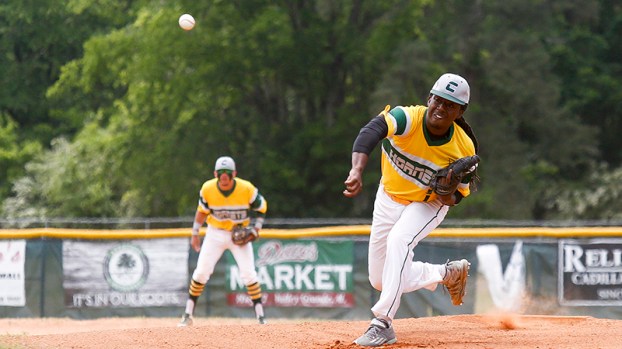 Concordia College Alabama pitcher Jadarian Mays got the start in game two of the three-game series against Stillman College this past weekend.

The last play in Concordia College Alabama athletics history was played at Bloch Park this past Saturday at Bloch Park to end the CCA Hornets baseball series against the Stillman College Tigers.

The Hornets won the first game of their final home series 17-16 this past Friday, but lost both games Saturday afternoon 11-1 and 10-7.

This season has been tough for the Hornets players, who like the other CCA athletes and students, were rocked by the announcement of the school closing this past February.

“The season hasn’t gone as well as I would’ve liked,” CCA head baseball coach Curtis Wimberly said. “It’s been a lot of let down because of the school closing, and the kids not knowing what’s going to happen in the future for them as far as baseball goes.”

The baseball program at CCA was just re-instated in 2013, and Wimberly has been trying to rebuild the program through the years.

The 2018 roster was largely made up of freshmen and sophomores after four seniors graduated from the 2017 roster.

“It’s a devastating thought,” Wimberly said. “To build a program starting from scratch, get to the point where you feel like you got things going in the right direction and then for the school to close, it’s devastating as a coach because you don’t know what your future is either.”

When junior center fielder Mason Miller heard that the school was going to close after the spring semester, he thought about quitting.

“My initial reaction was honestly to give up,” he said.

Without the encouragement from his peers, coaches and family members, the social and behavioral sciences major may have given up on his college career.

“My mom continued to push me and keep me on the straight road, so with her behind me I’m going to finish school.”

Miller is transferring to Talladega College where he will be able to transfer some of his credits and continue pursuing a degree in his major.

His teammate Dashawn West, a junior left fielder and second baseman, didn’t believe the rumors of the school closing until the official announcement was made.

“When I officially heard the news, I was wondering what school I was going to,” West said.

Fortunately for Wess, CCA stood by their word and assisted him in finding a school where all of his credits would transfer. Wess will be joining Miller at Talladega College.

“At first, I was worried, but Concordia helped me to figure out what I was going to do next,” he said. “That’s what I was really focused on. How would I finish my education without having to take any steps backwards?”

Darius Ford, a member of Phi Beta Sigma Fraternity Inc., and the Hornets only senior, looked at the school’s closing as a new opportunity for his teammates and classmates who will be moving on.

Ford, who is from Starkville, Mississippi, said baseball helped him find a career path he is passionate about in education. The opportunity to play at CCA gave him the opportunity to discover that teaching was his passion.

“If it wasn’t for baseball, I probably never would’ve found education nor had a love for education,” he said. “I just want to thank God for the opportunity that Concordia has given all of us.”

The real-time scoring updates weren’t available this year at the 2018 AISA golf state championship in Troy, so no one... read more