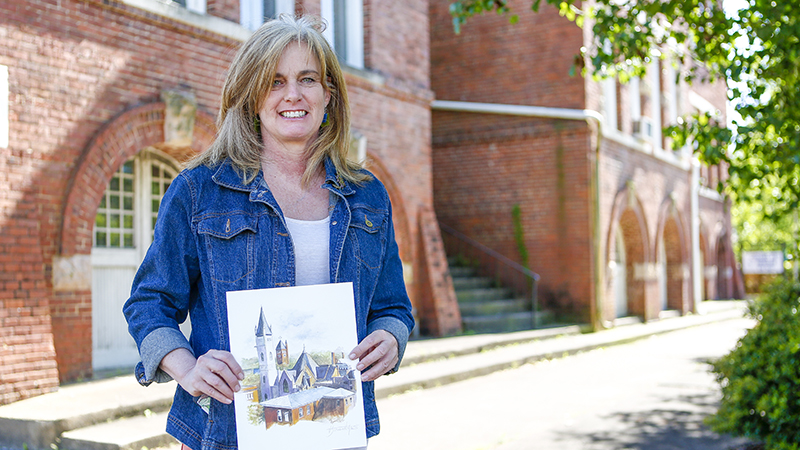 Vickie Stoudenmire poses in front of the historic Dallas Academy Building with a print of a painting she did from the bell tower of the building. (Alaina Denean Deshazo | Times-Journal)

Vicky Stoudenmire, a tenant of the Dallas Academy Building, has been doing everything she can to get the historic building back up and functional after an arsonist set fire to it back in October, as well as years’ worth of neglect of the gutters.

“The problem is in the gutters with the roof,” Stoudenmire said. “The roof has a few problems, but it’s more from maintenance not being done.”

Even before the fire, she has gone before the Selma City Council, talked with mayors and more, but there’s been no money and no success. That’s why she decided to take the matter into her own hands with the help of the Selma and Dallas County Historic Preservation Society and fellow community members.

They started a GoFundMe page requesting $25,000 for the gutter and roof repairs, which includes wood rot alongside the gutters. Stoudenmire said an insurance company should be in charge of repairing the fire damage, but she does not know a timeline on that.

“The way I see it, is it’s our bad. We’ve been after them [city of Selma] this long to fix it, and I know the city is hurting for money,” Stoudenmire said. “We just decided that we needed to take the reins and help the city out and get this done. We are the city. The citizens of the city are the city, so it’s up to us to take care of it.”

On the GoFundMe page, the creators request help to restore the building.

“The Dallas Academy building is one of Selma’s treasures and an integral part of our historic district. It was the home of Selma’s first public school and currently houses the City Ceramics Program and the summer art camp program for kids,” the page reads. “The gutter repairs have been neglected for many years and the building, which is otherwise a very sound brick structure, has subsequent damage to the wood surrounding the gutters. This is in urgent need of repairs to save the roof as well as the programs housed in the building. We are asking for help from concerned Selmians, ex-patriots and anyone wanting to see this building return to its former glory.”

Stoudenmire said they still plan to have the summer art camp, but it will be housed at Charlie Lucas’ building on Lauderdale Street.

The ceramics program is a popular activity for artists in the community, where they can meet and enjoy company while they work on new projects.

“It’s a place where anybody from any part of this town can come and go. The cost is so dirt cheap for someone to attend,” Stoudenmire said. “You can get people from every economic status sitting at the same table working on projects. It’s a Selma fellowship. Every race enjoys it, every economic status. It’s a great place to be.”

Stoudenmire said she wants to do everything she can to help save the building. She is even giving out 8×10 prints of an original watercolor painting she completed from the bell tower of the building to anyone who donates more than $25 to the fundraiser.

“For us to lose it would just be flat out stupid on our part. It would be irresponsible,” she said of the building. “It’s tremendous. For one, the history of this building is so significant. It was built in the late 1800s. It was the first public school in Selma.”

The Dallas Academy building is one of the contributing properties to the Old Town Historic District, which is on the National Register of Historic Places.

Stoudenmire said anyone wanting to donate can do so via the GoFundMe page at https://www.gofundme.com/repair-the-dallas-academy-building, or they can mail a check to SDCHPS at P.O. Box 586, Selma, Al 36702. As of Thursday night, the GoFundMe campaign had raised $2,410.