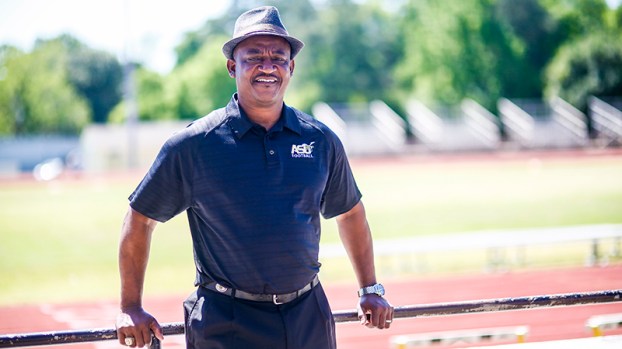 Alabama State University head football coach Donald Hill-Eley acted on his vision to get his program more involved with the smaller communities near ASU. His football team will play a scrimmage Saturday morning at Memorial Stadium, which is open to the public, for the first time.

College football is returning to Memorial Stadium Saturday, when the Alabama State University Hornets wrap up their third week of spring practice with a scrimmage from 11 a.m. until 1 p.m. The scrimmage is free and open to the public.

ASU is a Division I Historically Black College and University (HBCU) in Montgomery that plays in the Southwest Athletic Conference (SWAC).

After spending three seasons as the interim head coach, Hill-Eley was named the Hornets 29th head coach this past December.

He gets 15 consecutive days to run his spring practice to prepare for the 2018 season, and he came up with the idea of using his 12th spring practice to bring his team from Montgomery to Selma for the last scrimmage before the Black and Gold spring game.

“The university is behind us trying to impart back into Selma and our own community,” he said. “You keep hearing the negative – Concordia is closing, the crime and different stuff that’s going on with the education – and it’s like ‘What can I do to make a difference?’”

His answer was to bring his talent of coaching and his football team to Selma to bring some positive attention to the area.

Ronald Peoples, president of the Selma-Dallas County ASU alumni chapter, loves his alma mater, and believes the scrimmage will be a boost for his chapter and the community.

“We certainly think that it’ll be good for the city and the surrounding areas,” he said. “The young people will be able to come out and interact with the team. Alabama State will bring a lot more visibility than what they’ve seen recently, and so we’re just elated that this opportunity has become a reality.”

Saturday morning, ASU coaches will be recruiting at the local high schools. After the scrimmage, the players and coaching staff will spend time with and speak to the crowd of spectators.

“We’ll scrimmage for two-hours, and then we’ll have a chance for some mentoring for about an hour,” Hill-Eley said. “Players, coaches and everybody that we bring over will have the opportunity to talk to the young folks that’s in attendance and just spend some time with them.”

The scrimmage will be a homecoming for three members of the Hornets football program. The 2016 Times-Journal Player of the Year De’Quan Johnson (WR) and Khamari Gibbs played at Southside High School, and Brantley Johnson played for Selma High.

“Even though Alabama State is close and their families come to watch them play there, it’s nothing like playing at home,” Hill-Eley said. “Most of those guys played here in this stadium. To have a chance to come back and have their family and friends see them, I know they’re excited about it.”

De’Quan, Brantley, Gibbs and Kelsey aren’t the first players from the Selma-Dallas County area to play football at ASU, and they won’t be the last. The Black Belt region has always been an important recruiting area for the Hornets.

“Alabama State, when you look at the tradition, was built off the Black Belt area,” Hill-Eley said. “We have to do our part in recruiting these young men, and giving them an opportunity to get a great education and give us a chance to have some great talent. We are recruiting locally and heavily in the Black Belt.”

Southside High School’s head football coach Daniel Flowers is a proud ASU alumnus, and is looking forward to seeing his former star-athletes return home. Not only will his students and players get a live look into a collegiate practice, but it also means a lot to him to see that his alma-mater cares enough to come to Selma.

De’Quan and Gibbs both played under Flowers at Southside, and the young Panthers behind them are excited to see their former classmates again.

“The students are all talking about coming to the game,” he said. “This is big for our school. It lets my other players know that if they continue on the right path, they can go to Alabama State and play as well.”

The event will benefit more than just the students at Southside, but everyone who comes to watch the Hornets Saturday. The partnership between the city of Selma and ASU is a relationship that city councilman Corey Bowie hopes to continue growing.

The 2018 AHSAA North-South basketball boys and girls basketball teams have been selected to play at the Dunn-Oliver Acadome on... read more