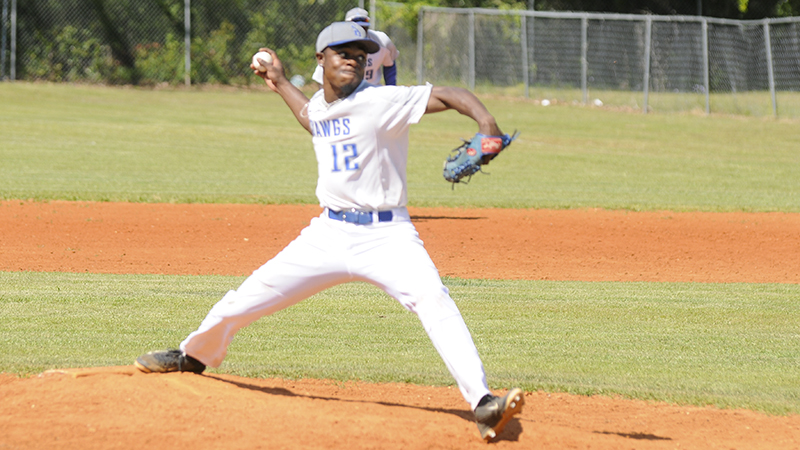 The tall grass behind the centerfield fence at Selma University’s baseball field was littered with irretrievable baseballs that were launched over the Selma Bulldogs banner in game one against the Stillman College Tigers Thursday afternoon.

The Tigers hit two home runs, but the Bulldogs hit three out, including a bomb by Marcus Hardy, which made it deep into the woods.

Game one of the double header was an offensive barrage, but the Bulldogs finished on top with a 16-9 win.

“Today was a big day for us playing against Stillman,” Selma University head coach Adrian Holloway said. “I knew we had to hit the ball well today to win. Fortunately, we came out hot from the very first inning.”

After an 8-run first inning, the Bulldogs knew they were locked in at the plate. The team racked up 14 hits, half of which were for extra-bases.

“I was on time finally,” Hardy, the big, left-handed clean-up hitter, said. “I’ve been trying to get my hands through the ball, so to see it go that far was a blessing.”

All nine hitters in the Bulldogs’ lineup crossed home plate at least once, and the 4-6 hitters each scored three times.

“We tried to attack the fastball and stay ahead in the counts so we could get good, comfortable swings,” Holloway said. “Fortunately for us, those good swings turned into home runs today.”

The extra offense felt good for a Bulldogs team that remembered being swept by the Tigers a year ago.

“We remember last year. They beat us in a three-game series,” Hardy said. “They put up 50 runs in three games. We just talked about coming back, and we got to win. So, everybody came out fired, hot and ready-to-go.”

Undeterred by the large deficit, the Tigers began a rally to get back into the game.

Bulldogs starting pitcher Derrick Sylve held the Tigers to five runs in the first three innings, but he had trouble getting out of the fourth inning.

He gave up a two-run home run in the third inning to Tigers first baseman Anthony Rosario, and had to face him again with two outs and the bases loaded in the fourth.

The right-handed hitter hit a 2-0 pitch deep to the opposite field down the foul line. When the ball landed, the home plate umpire called the hit a fair ball and three runs came into score.

The four-run inning made it a 13-9 ball game with three innings left to play.

Holloway made the switch to his reliever, Dallas County High School alumnus Dontae Stiles, with a man on first and one out in the fifth inning.

“Stiles was able to come in and give us good, quality innings,” Holloway said. “He had his good stuff today. That was the key. He kept guys off-balance, and had good control.”

Stiles, who doesn’t throw as hard as Sylve, was the change of pace the Bulldogs needed to shut down the Tigers offense for the rest of the game.

“My curveball was working really well today,” Stiles said. “I slid a couple fastballs by them, but today the curve just seemed to work better to keep them off-balance. So, we kept calling it.”

Stiles struck out three hitters, and only allowed two hits in the final three innings.

While he tamed the Tigers offense, the Bulldogs lineup provided three more insurance runs in the sixth inning.

“When you have run-support, it just makes you feel good,” he said. “You ain’t got no worries. The game ain’t tight, and everything is just off you.”

Confident in his teammates, Stiles retired the first three hitters he faced in the seventh inning to close out the game.

“We’re currently No.5 in the nation, so we’re winding down the season trying to play for a playoff spot,” Holloway said. “As long as we can stay around where we’re at now and keep winning, we should be fine. They came out with a sense of urgency today. We’ve been a little up and down this year, but we’re turning it on at the right time. I’m glad that we’re playing some Bulldog baseball finally.”