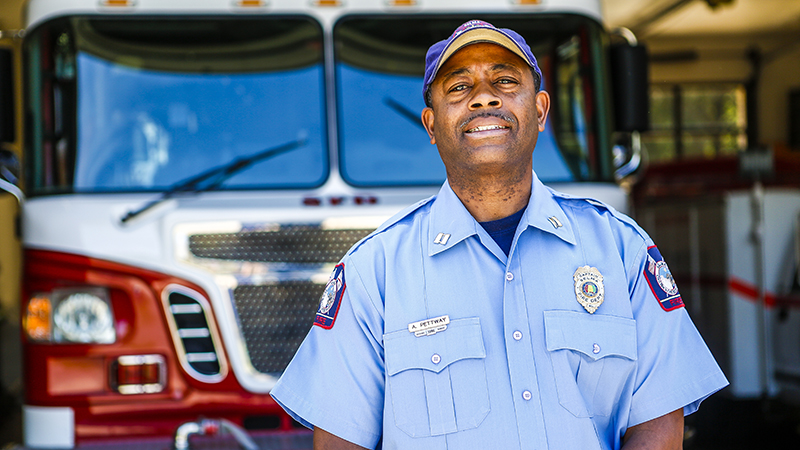 Capt. Aeneas Pettway poses for a photo Wednesday in front of one of the Selma Fire Department’s fire trucks. Pettway is the Times-Journal’s First Responder of the Week. (Alaina Denean Deshazo | Times-Journal)

Aeneas Pettway knew from a young age that he wanted to be in public service. From serving eight years in the Army, being a military policeman and now working as a captain for the Selma Fire Department, Pettway has done just that – served.

“This is like a childhood dream,” Pettway said. “I love what I do.”

Pettway has been with the department since 1996 and has been a captain since 2006. To him, being a fireman is about giving back to the community and being able to communicate with the public.

“You have to be a people person to be in this field because you’re dealing with the public all the time,” he said. “I choose to serve, that’s just part of me. It’s not for everyone, but in order to be here and stay longevity, you have to have somewhat of a feel for the people.”

Pettway said he got the need to serve people and be around them from growing up with a big family of his own.

“I grew up in a pretty large Family. There’s seven of us, so being around a lot of people has been my thing all of my life,” Pettway said. “You have to have a passion for people to be in this career. You’re a public servant.”

Pettway said being in public service has meant a lot of time away from his wife, Linda, and their children Lequesha and Mikhail, and much time with the people that he serves with.

“There has to be a balance between your home life and here,” Pettway said.

“The guys at the fire station are really my extended family because I spend just as much time with them as I do my real family.”

But even though he spent time away from home, he said it’s all worth it to be able to help just one person.

Pettway said many times firemen, and other first responders, go without thanks, but it means a lot when someone does take the time to say thank you.

“You hear a lot of negative things and people say we don’t get thanked enough, but when you one person that tells you that they appreciate you, to me it’s worth it,” he said. “We will lay our life on the line to serve the people.”

Wiltsie dedicated to giving back