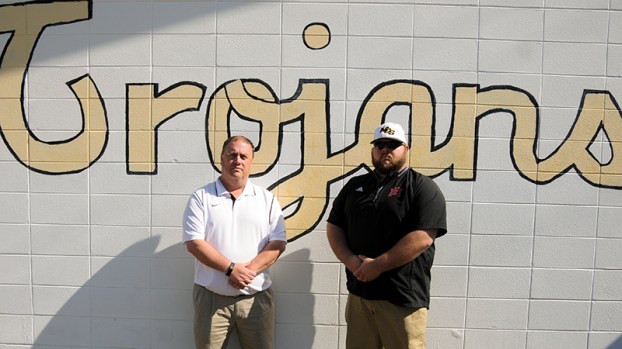 Meadowview Christian announced Bob Taylor and David Shaw as the new co-head coaches for the football program. Taylor will also be the new headmaster for Meadowview.

Meadowview Christian School announced two new additions to the athletic program this past Friday by hiring a new football and softball coach.

The Trojans have brought in Bob Taylor, who will also take over as the school’s new headmaster, and David Shaw as co-head coaches for the football team.

This past football season, current headmaster Micheal Blair stepped in as the football coach just before school started when a new full-time coach wasn’t available.

The Trojans play in an eight-man football league and finished the season with a 1-7 record.

Blair, 62, is retiring after the school year ends, and he is confident that Meadowview will be in good hands under Taylor.

“Taylor was my choice,” Blair said. “He’s a great guy. A good, godly man that will fit right in.”

Taylor has 20 years of coaching experience under his belt, including 14 years as a head coach. He spent the past three seasons at Lowndes Academy, and was a head coach at Morgan Academy during the 2012-2013 season.

Taylor was named the AISA Coach of the Year in 2016 when he reached the second-round of the playoffs in an 8-3 season with Lowndes Academy.

Since Taylor will also be Meadowview’s headmaster, several of the head coaching responsibilities will also be handled by Shaw.

The 27-year-old former defensive coordinator from Wilcox Academy is looking forward to his new opportunity to help rebuild the Trojan football program.

“This is an opportunity to help the kids grow and rebuild the program back to where it needs to be,” he said. “It’s about creating excitement and a buzz through the community and the school.”

After graduating from Oak Mountain High School, Shaw went to Mississippi State University. An injury prevented him from continuing his football career with the Bulldogs.

Even though he wasn’t able to play, Shaw still went to practices and learned from the Mississippi State coaches.

He later transferred to the University of Alabama, where he found an interest in the value of strength and conditioning.

Shaw wants to develop a strength and conditioning program for the Trojans to help them improve. He developed a passion for it during his time on the olympic weight lifting club team at the University of Alabama.

The Trojans football team will benefit from having its coaching staff in place in time to setup summer workouts and prepare them for next season.

Together, Shaw and Taylor will have to figure out how to get the best production out of the Trojans football players.

Taylor doesn’t officially start with the school until June 1, but he and Shaw have already started discussing how to approach the 2018 season.

Shaw has already started his career at Meadowview and was named the new head softball coach for the Lady Trojans.

Both Shaw and Taylor are excited about their new roles, and the Trojans can feel confident knowing they have two experienced coaches going into next year.

“I’m grateful for the opportunity to work at a place like Meadowview, where the primary focus is to continue to help kids grow,” Shaw said.

The Southside High School Panthers baseball team got a 1-0 lead to start the game against the Selma High Saints... read more