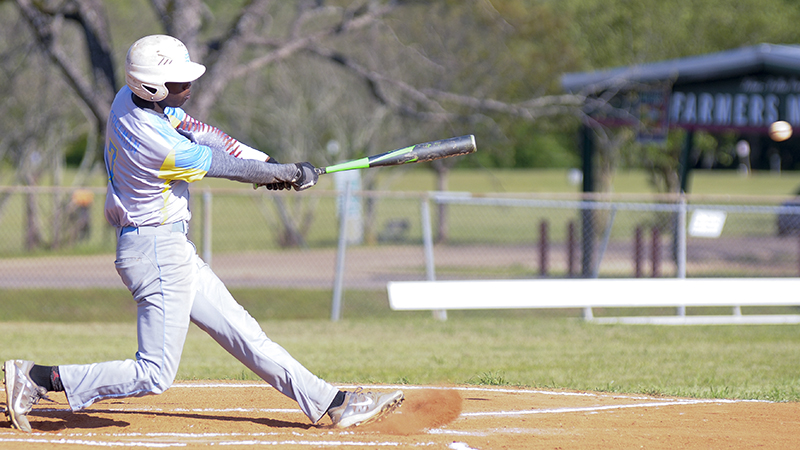 Selma High's Tyreshon Freeman gets a hit in the 13-8 win over Southside Tuesday afternoon.

The Southside High School Panthers baseball team got a 1-0 lead to start the game against the Selma High Saints Tuesday afternoon, but were unable to stay ahead for long as the Saints offense propelled them to a 13-8 win.

“We had a productive day swinging the bats,” Saints head coach Francis McDaniel said. “But the most important thing was our pitching was really on today.”

McDaniel started the game with Tyreshon Freeman, who picked up four strikeouts in four and one-third innings. Jacorey Brown entered the game with runners on second and third in the top of the fifth inning, and Rondarius Sanders closed the door for the Saints.

The Saints picked up seven runs in the bottom of the second inning to get in front of the Panthers.

Southside attempted to chip away at the lead, but the Saints kept scoring in each inning to keep them at bay.

“We were able to stay in the game a little deeper because we hit the ball pretty well,” Southside head coach Cameron Smiley said. “We just made some errors in the outfield that cost us pretty badly.”

The Panthers managed to cut the lead down to 9-6 in the middle of the fifth inning, but Sanders hit a line drive to the left field fence for an RBI triple. He scored on the next passed ball to extend Selma’s lead to 11-6.

The Saints momentum carried into the sixth inning when they added two more runs for insurance.

Sanders finished the game on the mound for the Saints. He allowed one run to score, but walked off the mound after striking out the final batter of the game.