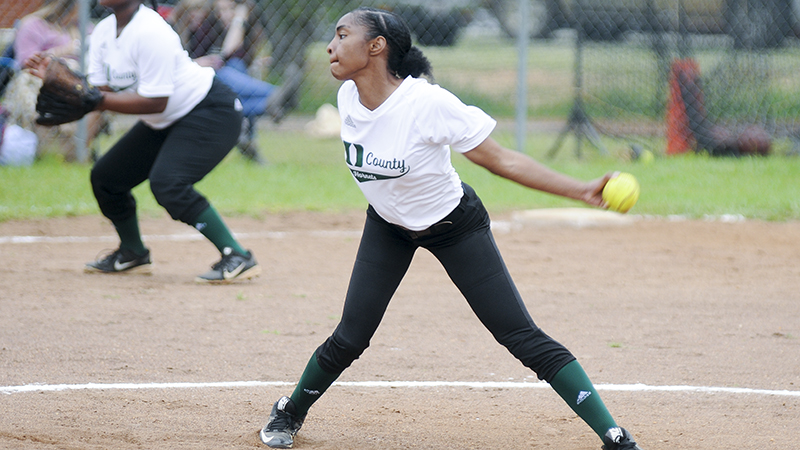 Dallas County’s Dajah Thrash allows only two hits in the 15-0 win against Autaugaville Monday. The Lady Hornets swept Autaguavillie in the double-header.

This was the third consecutive game where the Lady Hornets won by at least 15 runs.

Dallas County scored five runs in each frame before the home plate umpire called the game at the end of the third inning.

The Lady Hornets’ hitters were aggressive at the plate. The first four batters reached base safely on hits. Leadoff hitter Keyondra Fletcher and cleanup hitter Morgan Krumnow both went 3 for 3.

“We’ve been working really hard on hitting the ball out in front and being a little more aggressive,” Dallas County head coach Gaylen Denson said. “The girls are relaxing more in the batter’s box.” 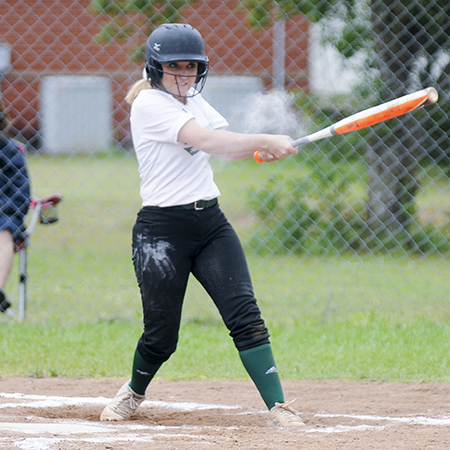 Dallas County’s Morgan Krumnow hits a RBI double to center field in game one against Autaguaville. She was 3 for 3 in both games Monday, including a homerun.

Krumnow hit two doubles that drove in runs for the Lady Hornets, and her courtesy runner scored in her place in all three innings.

Each player in Dallas County’s lineup reached base safely in the game, and each player crossed home plate at least once.

Dajah Thrash earned the win from the mound for the Lady Hornets. She pitched three shutout innings, and only allowed two hits in the ball game.

She finished the game with a strikeout for the teams’ fourth win of the season.

“She’s the one that we’ve been counting on,” Denson said. “She’s worked really hard this year on her control and moving the ball around. She’s really coming into her own right now, and hitting her stride at the right time.”

The Lady Hornets are gaining momentum at the right time as the final region matchups of the season are coming up.

The regular season area record determines the seeding for the area tournament. The Hornets are in a three-team area with Demopolis and Central Tuscaloosa.

The top-two teams that survives the area tournament moves on to the state playoffs.

“It’s time now, because we have our big area game against Demopolis Thursday and it’s going to be interesting to see what we can do,” Denson said.

The Lady Hornets defeated Central Tuscaloosa this past Wednesday 24-0, and are 1-0 in area play this season.

Krumnow went 3 for 3 with a homerun, and the team collected 11 hits in the game.