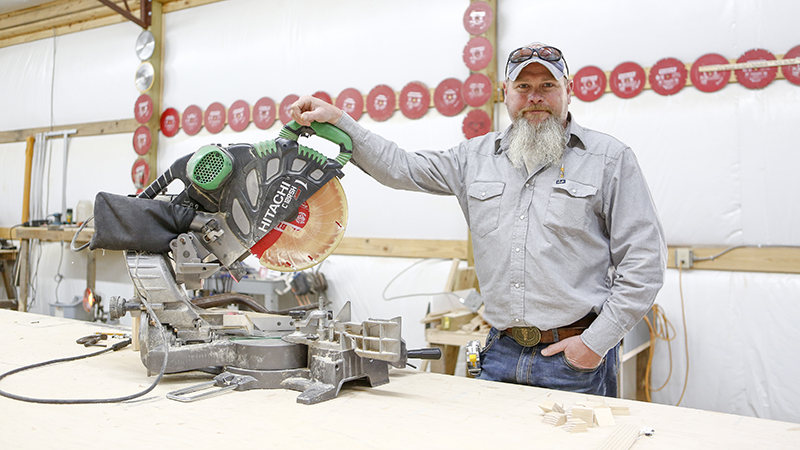 Micah Bailey worked in construction for most of his life, but when the economy took a turn for the worse, he lost his job along with many others in the field.

But that didn’t stop him from being creative and creating “Art for Artists.”

He began building things with wood, and eventually got a request from his sister, Amanda Leach, to build a wooden canvas.

“My sister was doing some artwork of her own, and one of the people she was studying under used a wooden panel, and she called me one day and asked me, ‘Bubba, can you build me a box.’ I said, ‘I’ve been in construction for a little while, I hope I can build a box,’” Bailey said laughing. 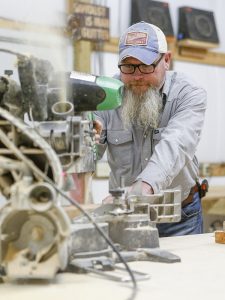 Bailey said he made one, and it just grew from there. He now owns his own business, Custom Made Art Panels, LLC.

“I was in construction my whole life, and I moved down here when my career ended. I started tinkering around in the old shop and made arts and crafts,” he said.

“When the panels themselves started to take off, we thought we might have found something here.”

Bailey was born in Oklahoma and raised in Birmingham, but remembers spending his summers and Christmas’s with his grandfather, M.A. Pearson, on his land in what is now Valley Grande.

Pearson built the house and wood shop on the property, and Bailey remembers following him around and learning anything he would teach him about woodworking.

“He was a general contractor here in Selma for 30 plus years,” Bailey said of his grandfather. “He was my main dude. I guess I inherited my carpentry type skills from him.”

Bailey said it must run in his blood, because he got the passion for building things just as his grandfather had.

“He was a master craftsman,” Bailey said. “He was very good at what he did. He taught me a lot, showed me a lot. I think I just get it inherently from him.”

Bailey remembers as a small child following his grandfather around and trying to soak in as much information as he could.

“I’d go to work with him and he’d let me tote boxes and stuff that kids could do,” he said. “But in the shop, I was always following Papa everywhere. I had fun just being there. He’d show me what he was doing, explained to me what it was and make it where I could understand it.” 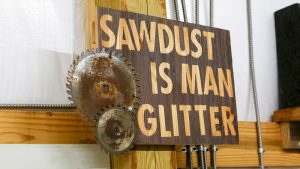 Although Bailey now has a new wood shop to work in, he did start out in his grandfather’s shop and still works in there for certain projects.

“You can still feel him. The smell is still there, the wood and the sawdust,” Bailey said. “It’s just got that positive vibe.”

Working where his grandfather once worked brings back memories, but it also draws inspiration for him.

“I draw a lot of inspiration posthumously from him when I get in that shop,” Bailey said.

“I still use some of the same old tools that he had. I feel him so to speak. That’s where I got the wood working gene.”

Although his grandfather has passed on, Bailey said he knows he would be proud of all that he has accomplished.

“I know he would be proud of me. Before he passed, I was already in construction … and he always thought that was neat,” he said. “He was very proud of me, and he would definitely be proud of what I’m doing now, especially here at his place.”

Many years ago, a man named Walter Hollman worked for Bailey’s grandfather, and even helped him build the original shop. Bailey was a child at the time, but remembers Hollman well.

“He worked for my granddad for 30 plus years, then I met him again two years ago at a local grocery store,” Bailey said.

After talking for a while, Hollman decided to start working with Bailey building the art panels.

“We started out in the shop that he helped my grandfather build 40 years ago, then we came over here to this new shop.”

The two are the only ones who work on the panels, which they customize to each customers specifications.

“I made it for a guy in Nashville that is painting it and sending it to a hospital in Houston.”

Bailey said he has around 15 to 20 regular artists right now, and he’s hoping to continue growing that number.

He hopes to one day be able to incorporate his own art back into his work schedule, but for now, he plans to keep building as many panels as he can and enjoy the work that the artists complete.

“It’s pretty inspiring [to see what the artist paint] because these artists are incredible. The stuff that comes out of their minds is amazing,” Bailey said.

“It’s neat to see it because it’s like, I had a little hand in that. That’s pretty cool.”