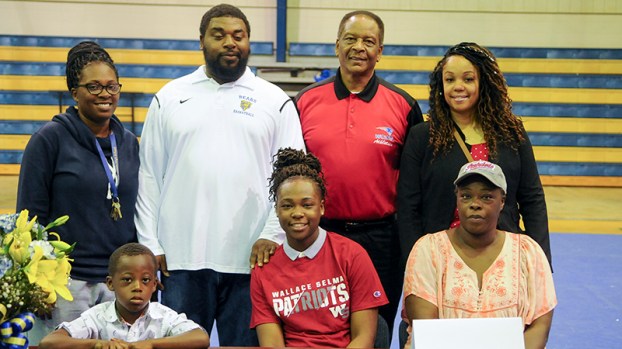 Keith senior Shatavia Moore had the spotlight on her once again in the school’s gymnasium Wednesday afternoon when she signed her letter of intent to play basketball at Wallace Community College Selma.

“I feel great knowing that I’m signing,” she said. “I’m kind of nervous, but it feels great.”

On the same floor she’s been playing on since she was in seventh grade, Moore heard the cheers of her fellow classmates as she officially accepted a full scholarship to continue her education.

The 2018 AHSAA Class 2A central region tournament MVP and Times-Journal Player of the Year was both excited and nervous about her signing day.

She averaged 16.4 points per game and five rebounds per game in her senior season. She was locked in all season leading her team to the Final Four in Birmingham, but wearing her WCCS Patriots T-shirt at half court in front of her family, friends and peers brought out a smile that her opponents on the court rarely got to see.

Moore received interest from other schools such as Lawson State, Tuskegee University and Coastal Alabama, but she chose WCCS because they were the only school to offer her a full ride. 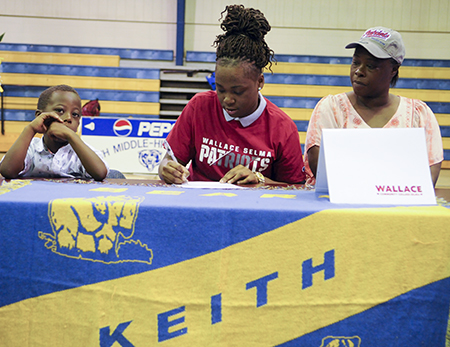 Lady Patriots head coach Herman Turner, who graduated from Keith in 1973, has been watching Moore’s game since she was in seventh grade.

“We are very fortunate to have a lady like her,” he said. “She’s a good person and a good student-athlete. That’s the kind of athletes we want to be a part of our program.”

The Lady Patriots get a 5-foot-7 ball-handling forward who can drive to the lane to score. She has the size and skill to be a versatile player for the Lady Patriots.

“Shatavia brings a lot to the table,” Turner said. “She’s going to be a great asset because of her physical and mental toughness. Tay has ice-water in her veins. They used to run two, three players at her at a time, and she still kept her composure, didn’t get rattled and continued to execute.”

Turner began pitching WCCS to Moore during her junior year, but he dialed it up even more for her senior season.

“This year, he was really on me trying to get me to come,” Moore said. “He told me WCCS would help me, he would give me a full scholarship and when I do the two years he’s going to help me get into a bigger college.”

Terwanda Moore, Shatavia’s mother, was proud to see her daughter’s hard work pay off. She sat right next to Shatavia as she signed the letter.

“I’m very proud of her,” Terwanda said. “I told her don’t be a follower and always be a leader. Do your best. If you want something in life, you’ve got to go achieve it.”

In addition to her family support system, Shatavia’s Keith family was also excited to watch her make her college decision.

“It’s always a great time when you can celebrate an athlete at your school, or any school, that is going to the next level,” Keith athletic director Clifton Reeves said. “She’s deserving of this scholarship, because she’s been consistent throughout her career. Every award that she got this season, she deserved it because she put in the time, work and effort.”

The Morgan Academy Senators (9-13) baseball team preserved its one-run lead with the bases loaded in the top of the... read more