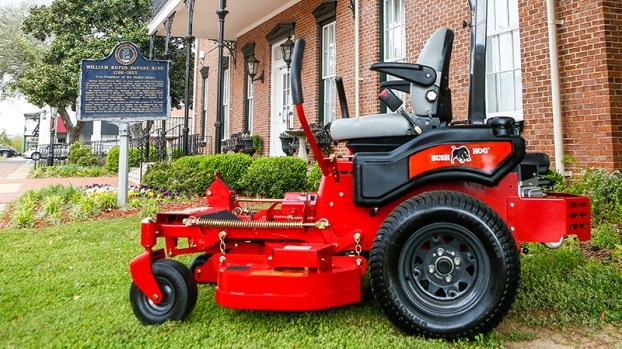 Jerry Worthington, president of Bush Hog, said the company saw the city’s need for zero-turn lawnmowers, so they decided to step up and help fill a need.

“We heard about the capital [equipment] problems the city was having, and one of the things they had on their capital budget was zero-turn mowers to do some landscape mowing and stuff,” Worthington said.

“That’s something we do. It’s something that we were able to help out [with], and we thought it’d be a good idea to do the right thing and help the city by donating four zero-turns to them.”

“We’re grateful to have Bush Hog come to the table to assist us in such a dire need that we have for the city. We’re very appreciative of what has been given to the city of Selma thus far,” Melton said.

“That’s a major dent inside of the need that we have for our capital equipment.”

Worthington said the mowers are priced at a little more than $6,000 apiece, so that takes care of at least around $25,000 worth of equipment the city needs. Melton said two of the four mowers will go to the recreation department, one will go to public works and the other will go to the cemetery department.

Melton said getting the four new mowers was a joint effort between council members, who reached out to Bush Hog.

“After those council members had reached out to them, I followed up with them, and they were willing to move forward to assist us with the equipment that we need for the city,” Melton said. “Bush Hog is an anchor in our community. We’re grateful for them being here over several decades. They reflect a true meaning of what it means to have an industry inside of your city that gives back to the city.”

While delivering the mowers to city hall, Worthington had the opportunity to meet one of the city employees who will be using the mowers.

“He was very excited. He didn’t realize we were giving him brand new ones,” Worthington said. “He thought we might be giving them some older models [or] used ones, but he was tickled and very appreciative. His guys are going to love them.”

By Oniska Blevins | The Selma Times-Journal The sound of whips cracking and cries of condemnation echoed through downtown Selma... read more