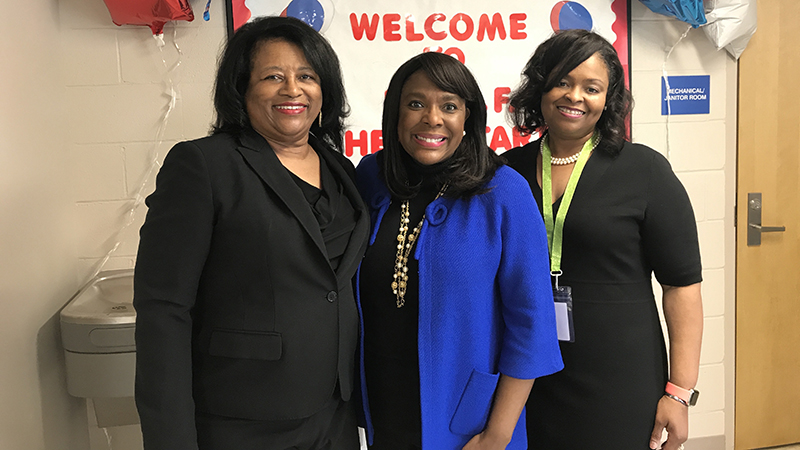 The new Head Start building has nine classrooms to serve students ages 0-3 and ages 3-5. Amenities in the new facility include a new playground and kid-sized water fountains.

According to staff members of Head Start, Sewell was essential throughout the process of acquiring this facility. Through her efforts in Washington D.C. and in Selma, Sewell was able to aid Head Start in their funding as well as their man power. She was a key player in the passing of an omnibus bill that increased the funding for Head Start programs for fiscal year 2018.

However, she had yet to visit the building she worked so hard to make a reality. Classes have only recently begun operations, and the students and staff members were quick to thank her for her hard work.

“Having her here is wonderful because she had a lot of influence with getting this project started. She is also working with us to keep Head Start centers open throughout Dallas County as well,” said Theresa Kimbrough, one of the main facilitators of the new Head Start. “She is a hometown girl and we want her to see the money at work.”

In addition to being a key player in opening the new facility, Sewell also gets credit for her efforts in preventing other locations from shutting down. According to Kimbrough, Sewell’s dedication helped keep another Head Start location in Orrville from having to shut its doors.

To Sewell, keeping the Head Start centers locally run was very important to her, instead of the program being outsourced to someone else to monitor. At one point in the past, she says that Selma’s Head Start initiatives were being handled by an organization out of Denver, which she believed needed to change.

“I believed it was real important to the parents of students that they have local leadership that is community-based because I feel they know more about what the needs of our students are,” said Sewell. “We needed stable leadership.”

Not only is the Head Start facility locally-run, other facilities in the area were able to merge with the new program, centralizing all Head Start initiatives in Selma.

The children, originally destined for Edgewood Elementary, were ecstatic to see their congresswoman, showing off their singing ability before sitting down to listen to Sewell read to them some childhood classics such as “Clifford, the Big Red Dog.”

Sewell’s mother, Nancy, tagged along as well to see the joy of the Head Start children. Both she and her daughter promised to keep the facility stacked with plenty of books.

Mirroring the excitement of the kids and her mother was Sewell herself. She took time to speak to multiple staff members and reflected on the bright future these children have because of the positive relationship between the government and the community.

After the visitation was completed, the kids hurried back to their classrooms to commence their lessons, all made possible by local figures wishing to invest in the children.

This was not the last stop in Selma for the day for Sewell, who later that afternoon hosted a press conference with District Attorney Michael Jackson to address issues surrounding crime in the Selma-Dallas County area.