Adams knocks in three and earns win in late rally 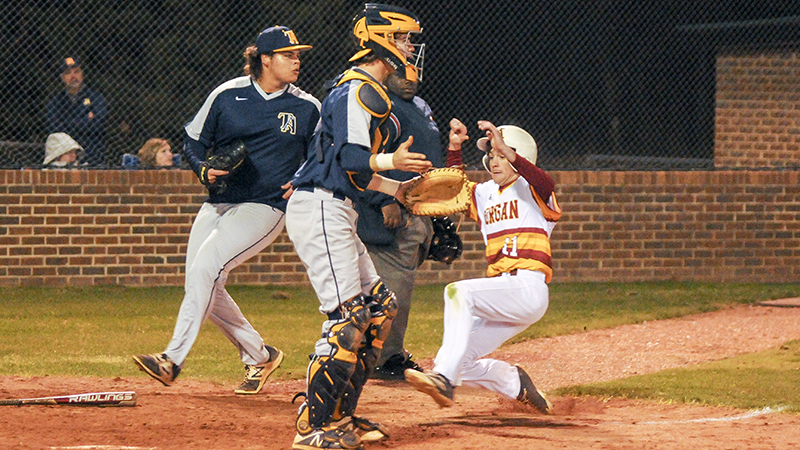 Morgan Academy’s Peyton Egbert slides safely into home plate on Britton Adams two-RBI single in the bottom of the sixth that tied the game 3-3.

The Morgan Academy Senators had to battle through cold weather and a brief power outage delay to come from behind and defeat Tuscaloosa Academy 7-4 on Monday night.

“We started off a little slow,” Morgan Academy head coach Seth Currie said. “TA’s a good team. We did a good job competing with them all game. It was good that we didn’t quit.”

Sophomore Matthew Davis started the game for the Senators, and held TA to just four hits and one run in five innings of work.

Morgan Academy was trailing 1-0 going into the bottom of the fifth, and a few lucky plays helped them tie the game up.

Britton Adams seemed to have been forced out at second base on a double play attempt, but the Senators benefited from a catcher’s interference call that gave them runners on first and second with only one out. TA chose to intentionally walk Brayton Brown in order to face the cleanup hitter Sawyer Hopkins with the bases loaded.

The strategy backfired as Hopkins was hit by a pitch and Adams scored the tying run.

Dione Allen entered the game to relieve Davis, and TA leadoff the top of the sixth with a line drive to left-center for a double. The next hitter hit a pop fly that landed in no man’s land between the second baseman and right fielder. Allen walked the next batter and loaded the bases before Currie decided to change pitchers.

Adams took over on the mound and struck out his first batter, but then gave up a two-RBI single before he could work out of the inning.

The Senators were trailing 3-1 going into the bottom of the sixth, and needed another big inning to stay alive.

Currie took the small ball approach to methodically cut back into the lead.

Plummer lead off the inning getting hit by a pitch. Peyton Egbert attempted to move Plummer over with a sacrifice bunt, but he beat out the throw. Allen successfully sacrificed himself with a bunt to give Adams two runners in scoring position with only one out.

“I just knew in the moment that I had to do it,” Adams said.

Adams cashed in on the opportunity and brought both runners home to tie the game 3-3.

“Britton had a really good at-bat there,” Currie said. “He saw a bunch of pitches, and ended up winning that battle for us.”

The Morgan Academy Senators weren’t done with the inning, but the outfield lights suddenly went out two batters later.

Then all of the lights went out and the whole field was dark. Both teams had to wait out an hour-long delay on a cool 50-degree night until the field lights came back on.

During the break, the players huddled around the dugout space heater for warmth. As time went on, they went to the outfield to play catch and a team game to keep their minds off the cold.

Around 8:30 p.m., the lights had comeback on and play was ready to resume. The Senators had runners on first and second base with two outs and Gunnar Henderson up to bat.

Henderson, who was injured to start the season, hadn’t gotten a hit yet in his first game of the season. In his fourth plate appearance against TA, he hit an RBI double over the center fielder’s head for his first hit of the season.

The Senators remained hot as Brown and Hopkins hit back-to-back RBI singles to stretch the lead to 7-3.

“I thought it was a good team win,” Currie said. “I think we’re becoming more of a team now that we’re getting these guys back off injuries, and I’m looking forward to the second half of the season being a good one.”