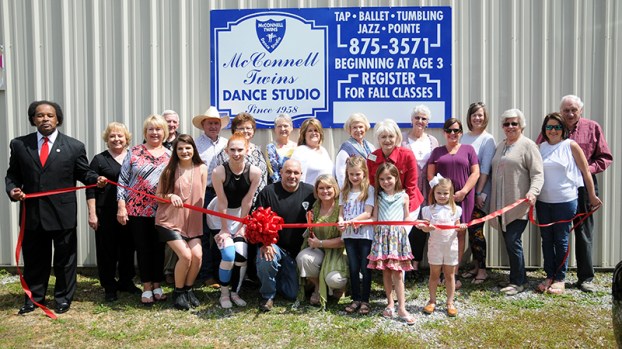 Congratulations were in order Saturday evening as the McConnell Twins Dance Studio held its ribbon cutting and grand opening of their new location. After being in the community for 37 years, the business has relocated to 3966 Landline Rd.

Identical twins Carole and Lynn McConnell started the studio in 1958 in Montgomery, and later Lynn’s daughter Carolyn Knight opened the Selma location in 1981.

After studying under and working with Knight for many years, Lisa Hicks Sexton bought the dance studio in 2006 and has since been running the business. She said she is excited about the new expansion and the possibilities that having a larger facility can bring.

The new expansion will allow the business to offer more programs throughout the year as well as during the summer.

“We hope to grow with the size of our building,” she said. “We’re hoping to offer more classes and we’re planning a summer workshop,”

She said after being in the original location for so long it was time for a move.

Sheryl Smedley, executive director for the Selma Chamber of Commerce, said the dance studio has been a great addition to Selma for many years.

“We’re very excited to know that Lisa’s continuing to grow and expand her business here in Selma Dallas County,” she said.

Knight said seeing the business that her aunt and mother started so long ago continue to flourish really makes her proud. She said Sexton is doing a great job continuing the legacy.

Barry Hood, a deputy with the Dallas County Sheriff’s Department, always knew he wanted to be in public service one... read more