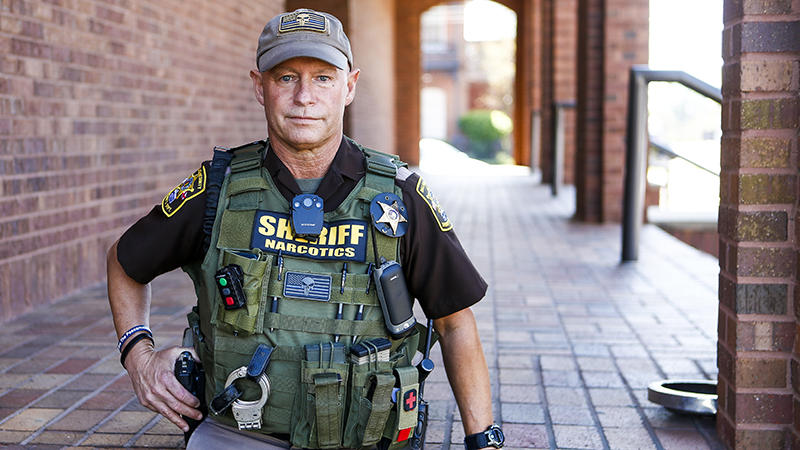 Barry Hood knew he wanted to serve the public by following in his parents’ footsteps.

Barry Hood, a deputy with the Dallas County Sheriff’s Department, always knew he wanted to be in public service one day. After all, that’s all he’d ever known.

His grandfather, father and mother were all in the military, and he too wanted to give back to the community.

“I had big shoes to fill,” Hood said. “My granddaddy [John Hood] was in World War I, then he got on with the Birmingham Police Department. Then my dad [John Hood Jr.] was a paratrooper [in World War II], then was in the military police.”

His mom, Bobbie, was also in the Army Air Core.

“It’s in my blood,” he said. “I like giving back to the community.”

Going in to work each day, Hood never knows what to expect. His only goals are to do the best he can for his community, and to make it back home to his family at night.

But the chaos is worth it to him, as long as he’s making a difference and helping those in need.

“I enjoy helping people and catching the bad guy,” Hood said. “Every call is different. You just never know what kind of call you’re going to get. You respond and act on it with what you’re trained on.”

Hood is married to Angela, and they have four children, Ana Belle Garzee, Madison Hood, Jessica Garzee and Bradley Hood.

But working all the time, Hood said the department is like family too.

“We’re tight knit. We work together, we’re close. Everybody knows everybody’s families,” he said. “It’s a home away from home.”

Hood started working for the department in 1994, and said though things have changed in that time, protecting the people of Dallas County has always been his number one priority, regardless on the outlook that the people have on him.

“I need to keep a positive look on things and try to make Dallas County a better place for these kids and families.”