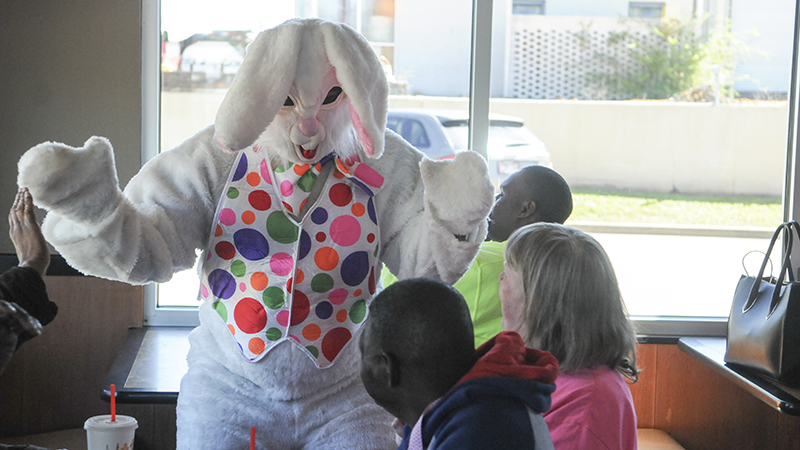 Members of the Alpha 1 Civitan Club hosted their annual outreach event at Burger King Thursday to show their support for the clients and staff of the Cahaba Center for Mental Health.

A 20-year event, A1 gets together with Cahaba to provide them meals and hand out Easter baskets to the 26 clients who were able to attend this year’s event.

The purpose of the get-together is intended to show the community that A1 cares about what is going on all around them, and to show their appreciation for those who are differently-abled.

“They are the most loving people. The best thing is seeing their smiling faces. They remember us,” said Bonnie Mollet, president of A1. “They look forward to this every year, and we show people we like participating in the community.”

Thanks to the volunteer efforts of one community member willing to dress up as the Easter Bunny, the Cahaba clients are each handed their own Easter baskets to take home with them. Each basket contained one stuffed animal, candy, eggs and decorations.

The locale chosen has always been Burger King, at the request of the clients. According to residential coordinator for Cahaba, Lynn Sanders, the clients burst out into “we want Burger King” chants when they chose another restaurant one year.

Burger King hosts the event every year, appreciating the business and enjoying the companionship built between their restaurant, A1 and Cahaba.

One person who tries to express her gratitude for the relationships built between the two is Sanders. She, like many others, does not take for granted what this means to those who deal with mental illnesses and disabilities on an everyday basis.

“They reach out and actually build relationships with other people. They have formed bonds over the past ten years, and it is very valuable to me. They enjoy letting people know how much they appreciate them,” Sanders said.

The clients themselves enjoy the event most of all, with one client, John, saying he “loves it every year.”

After eating their meals and receiving their gifts, the Cahaba staff and clients packed up, took their gifts home, until ending up back at the Cahaba Center with full stomachs and fuller hearts.

A1, who received their start as a branch of UAB, were happy to once again contribute to their community.

Helping out in a multitude of fashions, A1 and Cahaba both plan on competing at the local Special Olympics scheduled for April 4 at Memorial Stadium. According to Sanders, four other agencies have promised to compete at the games as well.

While the Cahaba staff did not receive baskets too, a successful day of giving for their clients was all the six staff members present could have asked for.

With the April Special Olympics coming up, competitors can also ready up for the national level of the competition in Washington state, where Selma will be represented as well. March, April and May have been designated as awareness months towards those struggling with developmental and mental disabilities. March is for awareness of developmental disabilities, April is for awareness of early intervention and May is for mental illness.

Mallieve Breeding passes away at 96