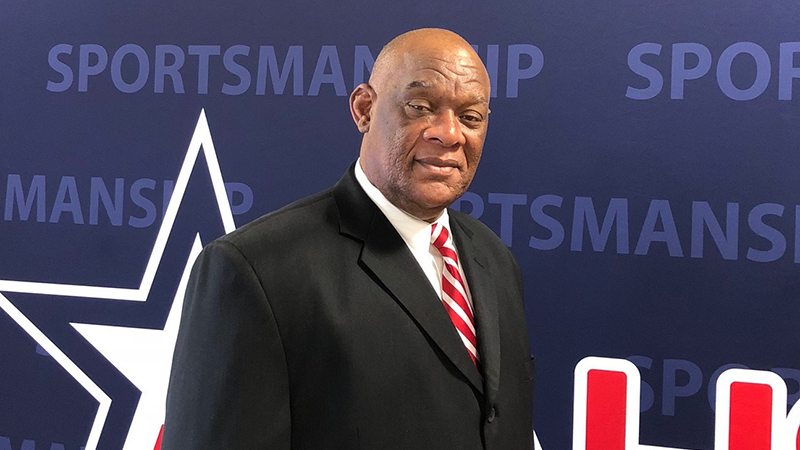 Jerome Tate coached for 22 seasons in central Alabama, and entered the AHSAA Hall of Fame this past Monday. (Submitted Photo)

Selma native Jerome Tate, 58, was inducted into the AHSAA Hall of Fame on Monday evening at the Montgomery Renaissance Hotel & Convention Center.

“It was a great feeling,” Tate said. “I never thought that would happen. I got into this business to help kids and try to make somebody else’s life better like I had teachers and coaches to make my life better. It’s just an honor to be among so many great people in the Hall of Fame.”

Family members, former colleagues and even former players were in attendance to celebrate Tate’s newest honor.

“There were a few people from Selma that was there,” he said. “That shocked me.”

Tate credited his successful career to his mentors Willie Maxey, A.A. Sewell, Aubrey Larkin and Willie Whitcomb who all had an impact on his life.

“Those guys influenced me,” Tate said. “They were there when I needed them and they taught me how to be a man and a responsible citizen.”

Tate graduated from Selma High in 1977 and went on to play college football at Alabama A&M University. He was a star defensive end for the Bulldogs and was inducted into his alma mater’s Hall of Fame in 2006 for his playing career.

The Hall of Fame coach started his career at Keith High School in Orrville in 1982-1983, and continued coaching football in the central Alabama region for another 21 years. After two seasons as an assistant at Alabama A&M and Tuskegee University, Tate moved to Lanett and served as the track coach and assistant football coach from 1986-1995. In the fall of 1995, he became Loachapoka High School’s athletic director and head football coach.

In his 22 seasons with the Indians, Tate amassed a 152-98 record, four regional titles and played in the state playoffs 17 times, including a streak of 14 appearances in a row.

He was named Coach of the Year by The Opelika-Auburn News, The Montgomery Advertiser and the Alabama Football Coaches Association during his career.

“I don’t worry about wins and losses, but if I was able to change somebody’s life that means a heck of a lot more to me than any wins or losses,” Tate said. “If I had something to do with teaching a young person how to better themselves and take care of themselves, then I think my job was well done whether or not we won or lost.”

The humble inductee couldn’t say for sure what his induction meant for his hometown community, but he wanted it to be an example of what is possible through hard work.

“I hope people from my hometown can see I put the hard work in,” he said. “You might not get inducted into the Hall of Fame, but you can do something positive with your life.”