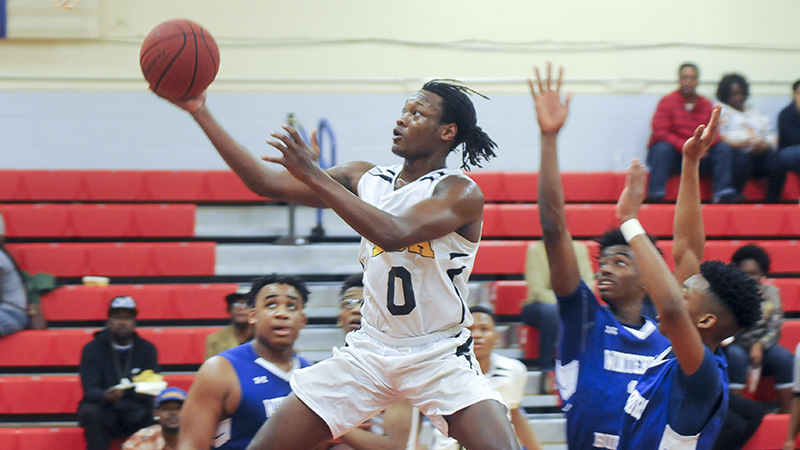 Ellwood Christian’s Loveless Craig averaged 19.6 points and 10 rebounds per game in his senior season. He was named the Time-Journal’s Player of the Year two years in a row.

Ellwood Christian Academy basketball fans knew what to expect when they saw Loveless Craig, the senior first-team All-County selection, on a fast break. A quick one-step gather that leads to a two-handed dunk that brings everyone in the gym to their feet.

In addition to his highlight reel dunks, Craig was a highly productive player for the ECA Eagles and has earned Times-Journal’s Boy’s Basketball Player of the Year for the second year in a row.

“It’s really a big accomplishment,” Craig said. “I worked hard this season because I lost my cousin Chris, so I worked really hard to be Player of the Year.”

The Selma/Dallas County area had several impressive players up for consideration for the Player of the Year award. However, Craig’s ability to do everything for the Eagles made him this year’s pick.

“God blessed me, because there’s a lot of good talent around here,” Craig said.

On the offensive end, Craig played every position but center for the Eagles. He made his living working inside and using his strength to score near the rim.

“I saw a lot of easy shots going to the rim,” he said. “I know the teams we played couldn’t guard me, so I’d dribble toward the goal and took advantage of it.”

Not only was he a prominent scoring threat, but he also averaged 10 rebounds per game. He aggressively attacked the backboard for put back opportunities and collecting defensive rebounds.

Craig started the season coming off the bench for the Eagles, but that was a strategy head coach Willie Shears used to get the most out of his top scorer.

“What people didn’t know, was that it worked better for him,” Shears said. “When I did bring him off the bench, he never returned to the bench. He was more productive with less time.”

It wasn’t long before Craig joined the starting lineup and improved his production for the team. His 25 point and 12 rebound game against Autaugaville was just one of his many double-double performances.

The Eagles made a deep playoff run with Craig leading the way. Ellwood won its area tournament, and won a home sub-regional game for the second season in a row.

The Eagles fell short of making the regional finals, despite a 22-point and 16 rebound game by Craig against Cornerstone.