Polishing Up: Homeowners get ready for 43rd annual Pilgrimage 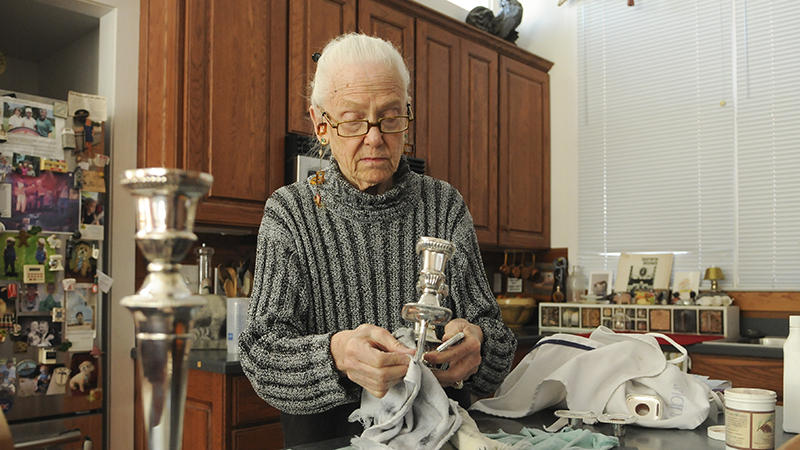 Shannon Linden polishes a piece of silver in her home Monday in preparation for Selma’s 43rd annual Historic Pilgrimage. Her home is one of many that will be open for viewing. (Blake Deshazo | Times-Journal)

Homeowners participating in Selma’s Historic Pilgrimage this weekend have started polishing up their homes for expected visitors.

This year’s Pilgrimage, which attracts individuals from a wide range of locations, will be the 43rd annual edition of the celebration of some of Selma’s most historic and grandiose houses.

The Pilgrimage will feature 15 attractions comprised of homes new to the list and also multi-year veterans of the Historic Pilgrimage.

While the homes shown off during the weekend may change from year to year, Jacque Johnson stays part of the process, helping organize Pilgrimage every year since before her time in the city. Being immersed in the historic showcase, Johnson understands the stress that comes with showing off a home to a bunch of strangers.

“I have been to more Pilgrimages than years I have actually lived in Selma. It is something I love helping out with,” Johnson said. “However, it is definitely a stressful event. There is a lot of cleaning. There is a lot of yardwork. There are projects people try to tackle that they have put off for years.”

Some of these tasks and projects include overhauling kitchens, rearranging the entire décor of rooms, restoration projects or simply a good cleaning.

For Shannon Linden, resident of the Platt-Lewis-Gale-Linden house (est. 1849), her project consists of polishing silver that is then used to decorate the home. A former antique silver collector, Linden believes the modest but time-consuming task of polishing silver contributes to the beauty historic homes have to offer.

For David Tipmore, whose Selma Avenue house was in the 2017 edition and is in charge of the McEachern Cottage for this year’s edition, believes the benefits of the event outweigh the costs of preparing for it.

“Little problems you’ve put off fixing and areas of the house you think no one will ever see suddenly become eyesores open to the public. Details count so much more. Dusting counts. Flower arrangements count. You have to look at staging and traffic flow,” Tipmore said.

“But for those of us who enjoy where we live and enjoy the charms of Selma’s older houses, the positives far outweigh the need to polish some silver or get out an old dust cloth.”

Linden, who began polishing and placing her silver weeks ago, understands the tediousness of repeating the same task over and over again, but enjoys showing off a house with so much history to it.

Participating in previous pilgrimages after moving to Selma from Atlanta, Linden says that this will more than likely be the last time she has her home shown during the Historic Pilgrimage, believing it is time. However, seeing the history of her home being appreciated and her silver shining with beaming radiance one last time brings her satisfaction.

“This is the third time I have participated with my home in the Pilgrimage, and probably my last. Polishing that silver is hard work. It has taken me weeks,” Linden said.

“However, this house has so much history to it. It was actually saved from being burned down.”

The Platt-Lewis-Gayle-Linden house gained notoriety for its beauty and also for its age-old tale of its survival during the Union Army’s burning of Selma during the Civil War. According to Linden’s story, the owner of the house at the time and the Union Admiral tasked with burning the houses were both member of the Masonic Society, and that connection enticed the Admiral to spare the house.

For more stories such as the story of the Linden house, attend Selma’s 43rd annual Historic Privilege.