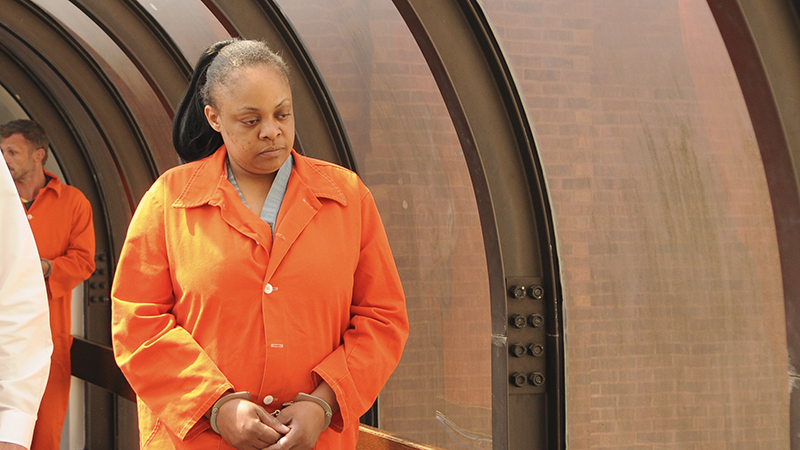 Cassandra Jones, who was arrested for attempted murder last week, made her first appearance in court Monday. Her bond was set at $1 million. (Blake Deshazo | Times-Journal)

A 39-year-old Selma woman arrested for her alleged involvement in the shooting of a 3-year-old while in his mother’s arms last week made her first appearance in court Monday afternoon.

Armstrong informed Jones of her charges, which were attempted murder and shooting into an occupied building, and appointed Selma attorney Gary Thompson to represent her.

Armstrong set Jones’ bond at $500,000 for each charge, totaling $1 million. She was originally booked into the Dallas County Jail without bond.

“She’s lucky the bond wasn’t higher. She’s lucky she didn’t get a $10 million bond,” said Dallas County District Attorney Michael Jackson. “This was a terrible crime, but we’re glad that the judge set a high bond to send a message.”

Jones is accused of taking part in a drive-by shooting that injured a 3-year-old. Jackson called it one of the “worst” crimes he has seen.

Jones was arrested Friday morning after the Selma Police Department executed a search warrant at a home on Primrose Terrace, according to Selma Police Chief Spencer Collier. The department was looking for Jones, 19-year-old Kentrevious Washington and 19-year-old Adrian Richardson Jr., but no one was home.

“While we were on scene, Ms. Jones approached us,” Collier said last week. “She actually drove at us, and one of the officers said that’s the vehicle that was involved yesterday, and of course we took her out at gunpoint.”

Collier said Monday that Washington and Richardson are still wanted for attempted murder and shooting into an unoccupied building. They are considered armed and dangerous.

The shooting happened last Thursday night around 7 p.m. at an apartment complex on the 1900 block of Marie Foster Street.

According to Sgt. Ray Blanks with the police department’s Criminal Investigations Division, witnesses told detectives Jones was seen that night driving a tan SUV into the apartment complex’s parking lot.

“Once in the parking lot of [the] complex, her son Kentrevious Washington came up through the sun roof of the vehicle and started shooting an assault rifle at the crowd of individuals on the sidewalk,” Blanks said in a press release.

“Jones then turned around at a high rate of speed and started shooting a gun out of the driver’s window along with her son at a mother and her 3-year-old child who is lying on the ground.”

Blanks said the child was grazed on the right side of his head by one of the bullets.

“It is one of the worst crimes we’ve seen in Dallas County, and there’s no excuse for what happened,” Jackson said Monday after Jones’ hearing.

The child was taken to Vaughan Regional Medical Center and then airlifted to a Birmingham hospital for further treatment. Jackson said the child is expected to recover from the injury.

Collier said the shooting is believed to be in retaliation from an earlier physical argument. He said an assault rifle with 7.62 mm rounds and a heavy-caliber handgun were also used in the drive-by shooting.

Jones is scheduled to appear in court again on April 3 for a preliminary hearing, according to Jackson.

Polishing Up: Homeowners get ready for 43rd annual Pilgrimage