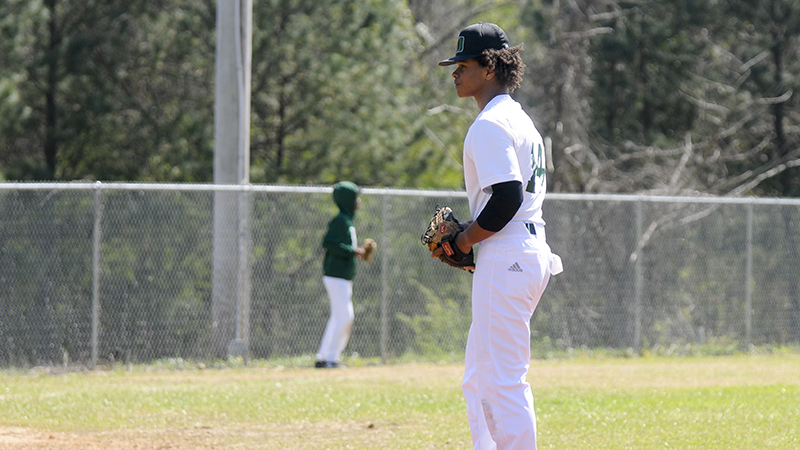 The Dallas County Hornets baseball team defeated Sumter Central 11-0 for its eighth win of the season on Monday afternoon in Plantersville.

Osagie Aghedo had a strong performance from the mound as he went all five innings on just 61 pitches. He lost the perfect game early by hitting the second hitter he faced, but was able to maintain the no-hitter for the rest of the ball game. Sumter Central’s only other base runner to reach first safely, did so on a fielding error, but he was thrown out trying to make it to second base on the play. Aghedo’s game-ending strikeout was his ninth of the ball game.

“He’s been our starter since the season began,” Dallas County head coach Mark Rouleau said. “Outstanding job on his part,”

The whole Dallas County lineup scored at least once during the game which was ended early by the mercy rule. Hornets designated hitter Andre Smith laced a line drive to left field for a two-RBI double in the first inning to get things started. After a three-run first inning, the Hornets batted around in the bottom of the second and scored seven runs.

“Since this season has begun, this team has hit the ball,” Rouleau said. “I think we’ve only had two games that we haven’t 10-runned our competition. They’ve been hitting the ball hard where it needs to be hit.”

Sumter Central got into trouble by walking batters, and then compounding on their issues by committing errors. The Hornets continued to apply pressure on the base paths by stealing bases every chance they could.

Dallas County has gotten off to a strong start this season with an 8-1 record. The area win over the Jaguars carries more weight because the top two teams in the area standings make the playoffs. Central Tuscaloosa and Demopolis are the other two teams in Dallas County’s area.

The Ellwood Christian Academy Eagles defeated Autaugaville 15-1 this past Thursday in Autaugaville. Malachi Washington pitched a no-hitter and hit a two-run homerun.

The Trojans lost their first game of the season this past Sunday 10-7 to Marengo Academy. Lee hit a grand slam in the game.