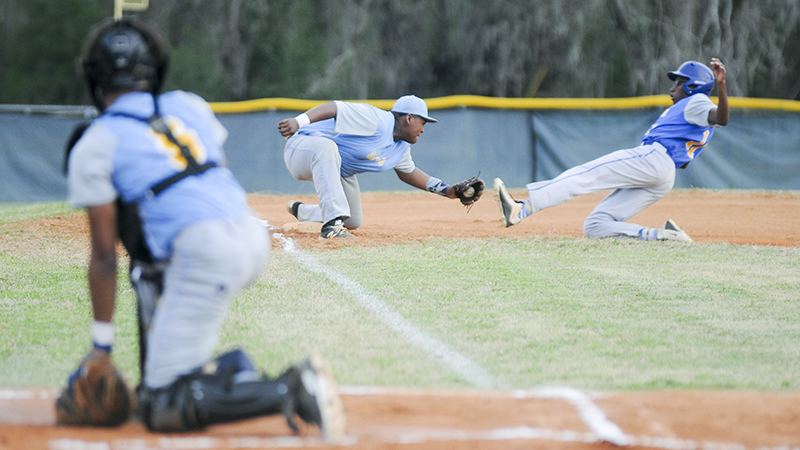 Selma third baseman Nicholas Nettles tags out a Keith runner attempting to steal third in the top of the first inning. Selma’s 8-5 win over Keith on Monday night `was their first victory of the season.

The Selma High Saints baseball team (1-1) earned their first win of the season in an 8-5 victory over the Keith High School Bears (0-1) on Monday night at Bloch Park.

“It feels great to get that win,” Saints head coach Andre Lamar said. “Especially after being down 5-1, I told the team we can’t underestimate any opponent.”

The Saints needed a rally in the bottom of the fourth to get back into the ball game, and Rondarius Sanders, who came into the game in relief, held the Bears scoreless in his final three innings of work.

“We already know that we can always depend on [Sanders],” Lamar said. “That’s what we expect out of him.”

Patrick Pettway scored the first run of the game for the Saints in the bottom of the first inning on a one-out sacrifice fly hit to centerfield by Jekobi Lee.

However, the Bears answered by scoring in the top of the second, third and fourth innings to jump out to a 5-1 lead. The Saints were having issues walking batters. Only one of the Bears who scored reached base safely because of a hit. The other four runs reached on walks.

After the early inning struggles, the Saints offense came alive and Sanders settled in on the mound. The Saints batted around the lineup in the bottom of the fourth and tied the game at 5-5. Back-to-back leadoff walks got the inning started, and the Saints scored four runs on three hits.

The Saints took the lead in the bottom of the fifth inning. Tevin Craig stole both second and third base after a one-out walk thanks to the generously deep backstop at Bloch Park. Preston Waller then dropped a sacrifice bunt in front of Keith’s catcher, who opted to get the out at first and allowed Craig to score the go-ahead run.

“We practice bunting all the time because we know at any point in the game that’s going to be a necessity,” Lamar said. “The sac bunt was perfect. It worked out exactly as we practiced it.”

The Saints added two insurance runs in the bottom of the sixth on a fielder’s choice followed by a throwing error on the next play. 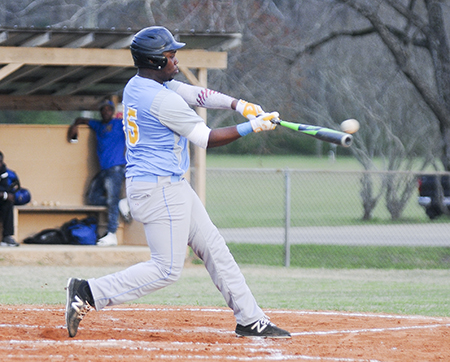 Selma’s Jekobi Lee hits a sacrifice fly to center field to score the first run of the game for the Saints.

Selma’s starting pitcher Tyreshon Freeman said he was glad to get the run support from his teammates after he left the mound.

“I can depend on my team,” he said. “As long as we keep this enthusiasm going, we’re going to be alright.”

Sanders finished his last three innings by giving up only two hits. He earned the win as a reliever and recorded nine strikeouts in the game.

The Saints and the Bears were excited to get this new season underway. It was the season opener for Keith and Selma’s second game of the year. Both coaches are looking forward to seeing their teams improve off of last season.

“I’m looking for some of my seniors to step up,” Keith head coach Anthony Lumpkin said. “We’ve got a bunch of returning guys, so they’re looking forward to it and they’re ready to play.”

The Saints, who lost their first game to Dallas County, were glad to rebound with the win against the Bears. Lamar is looking forward to his team being able to count on the returning players from last year to help propel them forward.

“We’ve got some young players with a lot of experience,” he said. “The strength of Selma baseball is our bats. We can hit the ball pretty good and we have a lot of speed.”

Both teams are expecting to continue putting up good offense, just as they did on Monday night.