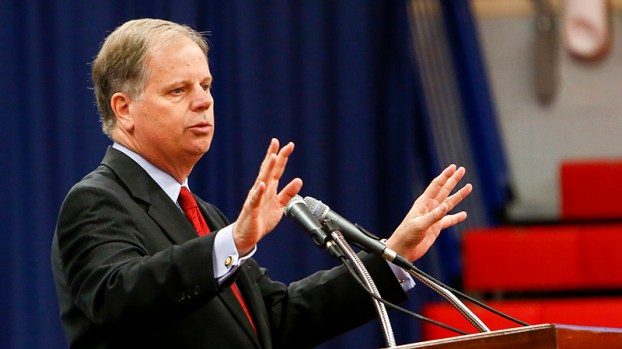 Jubilee participants of all ages, sizes and races gathered in the gymnasium of Wallace Community College Selma for the Martin and Coretta Scott King Unity Breakfast to kick off another event-filled day commemorating the civil rights march from Selma to Montgomery.

The breakfast year-in and year-out is consistently one of the most popular events, and this year was no different, with 60 reserved tables and a myriad of political figures on the national, state and local level speaking and attending.

This included guest speakers such as Sen. Kamala Harris (D-CA) and state figures such as junior Sen. Doug Jones and Congresswoman Terri Sewell. Each of these speakers has gone through some sort of change since the previous Jubilee.

Harris and Jones both saw changes in their political careers, transitioning from acting attorneys to newly-elected senators from California and Alabama, respectively. The special election of Jones back in December delighted Sewell with the opportunity to work with somebody as committed to rural areas as she is. People at the breakfast went as far as calling Jones “an early Christmas present.”

“Just a year ago at this breakfast, I never imagined I would be here. Not only speaking to you all, but as your junior senator,” Jones said. “We can never let the lessons of Selma be lost on the generations behind us.”

While the breakfast was an opportunity for reflection and unity, it was also a time for celebrating the achievements of those trying to advance the conversation with racial equality. Each year, the unity breakfast recognizes someone special who has gone the extra mile to make a difference in the world for his or her race. Named the “National Unity Award,” the 2018 recipient was Congresswoman Maxine Waters (D-CA).

Harris, Jones, Sewell and Sen. Hank Sanders each had something valuable to say to the audience during their individual speeches, with each focusing on the importance of remembering history and proud of the changes Alabama has undergone. With the state’s election of its first Democratic senator in decades, Alabama’s political makeup has been subject to change as well.

While the history of the Civil Rights Movement includes pieces of the gruesome ways Alabamians treated African-Americans, the speakers and attendees understood the importance of all types of history, no matter what heart strings they pull on.

“This provides a wonderful time to talk about citizen engagement. So many people take the history of this for granted,” said Sue Bell Cobb, former chief justice of Alabama’s Supreme Court, the first woman in the state to hold that title. “I just hope everyone is re-energized. Alabama has come a long way, but we still have a long way to go.”

Along with the speakers, the event featured a vast array of food, and multiple performances put on by the Freedom Singers to lift the spirits of the audience on the crisp Sunday morning. The breakfast serves as a way for people to get their last day of Jubilee started off on the right foot with some community engagement, before going to the annual reenactment of the “Bloody Sunday” march across the Edmund Pettus Bridge.

Understanding the importance of the day and the necessity to keep moving forward, Sewell made sure to not leave the audience without passionately addressing some points that were heavy on her mind.

“We have a ‘kumbaya’ moment on the bridge, and then we go back to Washington, D.C. and do nothing about it. We need change,” said Sewell.

The annual reenactment of ‘Bloody Sunday’ for the 53rd edition of the Bridge Crossing Jubilee will begin with a pre-march rally at Brown Chapel AME Church before marching over Edmund Pettus Bridge.

Vendors selling food, art and a little of everything lined Water Avenue Saturday for the 25th anniversary of the Bride... read more