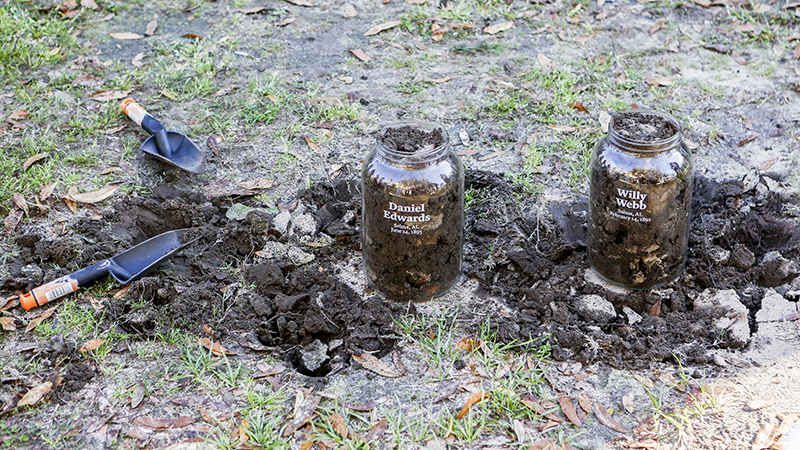 Soil samples were collected Saturday at the location of the old Selma jail in honor of two lost brethren. (Alaina Denean Deshazo | Times-Journal)

In recognition of the Bridge Crossing Jubilee events, multiple organizations committed toward racial advancement met outside the location of the old Selma jail to pay their respects to two lost brethren from long ago through the soil collections of their lynching sites.

National members of the W.K. Kellogg Foundation, members of the Black Belt Community Foundation, the Equal Justice Initiative and Selma public figures all met at the old jail site bright and early at 7:15 a.m. Saturday morning, to honor Willy Webb and Daniel Edwards and their wrongful slaying.

Willy Webb died Feb. 14, 1892, after a lynch mob killed him for unproven allegations of his rape of a white woman. However, during an era of Jim Crow, Webb never received due process. After being jailed the night previous, the lynch mob got a hold of him a night later around 11 p.m.

It is not clear how he died, however, the EJI defines “lynching” for this project as any wrongful killing of a black person at the hands of white people during the period between the Civil War and World War II. Daniel Edwards died June 24, 1893, after a lynch mob hanged him and “riddled” his body with bullets after his consensual sexual relationship with a local farmer’s wife was discovered by her husband and their friends. Despite the consensual nature of their contact, Edwards was still charged with sexual assault by the lynch mob, wrongfully executing him.

According to Ainka Sanders of the Selma Center for Nonviolence, Truth and Reconciliation, there are 19 victims of lynching in the area surrounding the old Selma jail from the Civil War to World War II eras. Furthermore, the EJI says there are 361 known cases of lynching in Alabama alone. Jackson remarks on the cruelty of the time period and how Selma represents progress for all African-American people.

“There are places where people have been killed and we don’t even know it. There are so many that we may never know,” said Jackson.

“Some people want to leave history in the past, but that cannot happen. People say they stand on holy ground when they are in Selma.”

To honor the memories and lives of Webb and Edwards, all attendees of the event used their shovels to place soil from their lynching sites into their respective jars.

Before collecting the soil, Oronde Miller of the W. K. Kellogg Foundation performed a libation in honor of the two men. A libation is a water offering, where the water is poured out in tribute to a sacred cause.

For the entirety of the tribute, Miller repeated the word “ashay,” a word meaning “amen” or “and so it is” with African origins.

“To these men and among the many others who were taken, we give honor to their lives,” Miller said during the prayer. “We come to pay tribute to our ancestors. We must continue to carry the torch.”

In order to carry the torch of racial advancement into the future, EJI has announced its partnership with community organizations to collect soil from every lynching site in Alabama. They also have plans to turn many of these sites into historical markers.

According to Daron Harris with the Black Belt Community Foundation, the soil is going to be taken to Montgomery, where it will be added with other EJI historical collections.

After collecting the soil, paying tribute and sharing history, Ainka Jackson ended the program with a poem and with some words of encouragement.

“We are brilliant, we are brave, we are innately powerful. We are more than just bodies, we are human,” Jackson said.