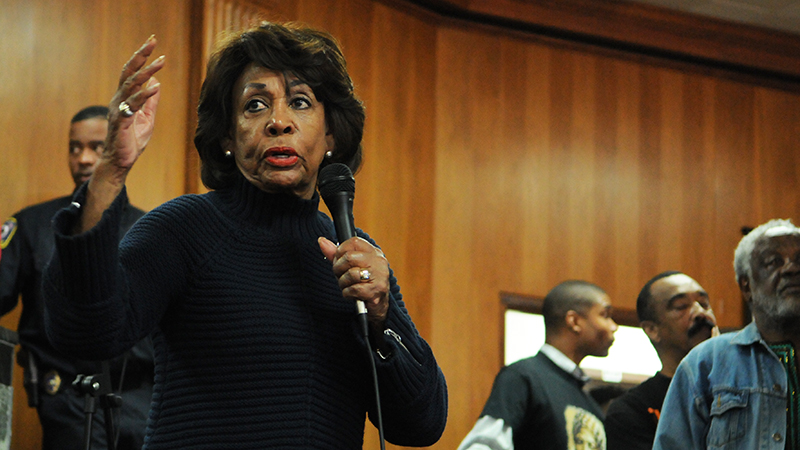 The Dallas County Courthouse courtroom was filled to capacity on Saturday morning in Selma for the Intergenerational Summit panel discussion with congresswoman Maxine Waters and CNN commentator Angela Rye.

“To have this intergenerational conversation between elders, millennials and youth and to have it culminated with a charge from a 93-year old educator that made it clear that when black children reject the myth of black inferiority and white supremacy and that their lives do matter, then nearly everything that is haunting the black community now will change,” Jubilee organizer Faya Toure said. “Seeing the energy of these young people and the knowledge that’s being shared is just so exhilarating.”

Rep. Waters was passionate and energized her audience.

“It’s important personally for me because I get rejuvenated and I get inspired just being in this historical setting,” Waters said. “Having all the people who come from all over the country who are not only recognizing the contributions that have been made for justice, peace and equality and walk across that bridge is more than inspiring. It is the kind of thing that enables me to go back to Washington D.C., and do the kind of fighting and struggle that I have to do for the least of these.”

She covered a range of topics from the president to issues facing the black community. She didn’t hold back her criticism of the administration’s leadership and responses to numerous issues.

“This is an unusual time in the history of this country,” Waters said. “Now, we have a president, someone that’s at the head of our government who is the most least deserving human being that’s ever served in that office and he’s stoking racism, discrimination and he’s dividing this country. I think that people are feeling a bit uneasy wanting some change, wanting something to happen and I hear that as I come here to Selma.”

There were children, college students, community activists and elders in attendance to listen and join the discussion about the state of the country and the importance of getting involved with activism. The room was filled with emotion, and Rep. Waters and Rye struck a chord that resonated with their audience.

“The commemoration of Bloody Sunday is always important to ground us with what we have to do to move forward,” Rye said. “It’s so important for us to always remember sacrifices that were made just so that we could access the ballot box.”

The young people in the room were encouraged and motivated by what they heard from Rye and Waters. Students from Tuskegee University, Spelman College and other colleges and universities made the trip to Selma to learn about the past and receive instruction for the future.

Tiara Chambliss and Kristen Walker, interns for the Georgia Legislative Black Caucus felt empowered by seeing two respected and influential women that are working to make an impact speak. As young women who want to make an impact themselves, they soaked in as much as they could from the intergenerational summit.

“I think it’s important that we recognize our history, where we come from and the actions that our ancestors had to take for us to make the strides that we’ve been able to take,” Chambliss said. “It was amazing, because I personally listen to Angela Rye’s podcast and I hear all the views that she has and how she thinks. And the ground-breaking work that Maxine Waters has done for us just warms my heart, because I too want to make a difference.”

“As a black woman personally, it was just beautiful to see two very strong powerful black women in these spaces already making and shaking and doing so much good,” Walker said.

Robert Stewart, a Selma citizen and member of Alpha Phi Alpha Inc., felt that the culmination of the young and the old is a necessary combination to continue moving forward. He said that the summit left him understanding that a strategy will be key in achieving progress.

“Us young people, we have talent, but it’s important to incorporate that with the wisdom of our elders in order to make us a formidable force and improve the conditions of society,” he said.

“We really took time to assess our state in America as African-Americans and as our nation as a whole. Moments like this are important because it highlights Selma, Alabama, and what happened in Selma helped move the country forward.”