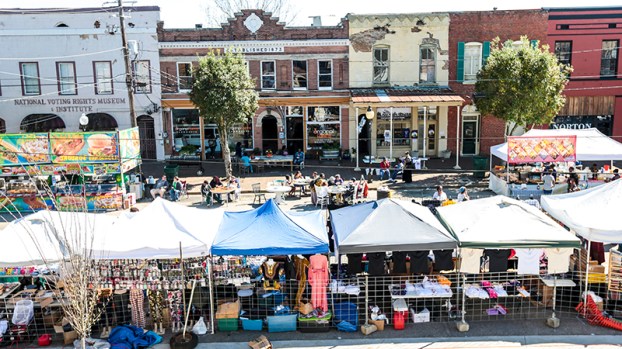 Vendors selling food, art and a little of everything lined Water Avenue Saturday for the 25th anniversary of the Bride Crossing Jubilee.

A crowd of people shopped, ate and listened to artists perform on the gospel and hip-hop stages, as they commemorated the 53rd anniversary of Bloody Sunday and the 50th anniversary of the death of Dr. Martin Luther King Jr.

“This is my first time being here, and it definitely won’t be my last,” Morgan said as he walked around at the street festival Saturday afternoon.

“It’s the biggest deal to me. I’ve been posting on Facebook, calling my friends, calling my family and letting them know there is no other choice. You have to get down to one of the Jubilees. If not this year, then next year. If not next year, the year after that. It’s a must.”

Morgan arrived in Selma Thursday and will leave Sunday afternoon.

“I’ve been to seven or eight different events since I’ve been here, and they’ve all been pretty great,” Morgan said.

Morgan said he came to the Jubilee to meet the foot soldiers that helped lead the movement and change history, and he got to do just that Saturday morning at the Foot Soldiers Breakfast.

“I’ve had the chance to meet them here, that’s really why I’m here — the knowledge, tradition, the culture,” Morgan said. “This is my first time ever being at anything so massive on this magnitude, especially with my own race, my own culture. That’s what really brought me here.”

Morgan said this experience has given him a new perspective on life.

“Every time I shake any one of their hands, it’s like butterflies in my stomach honestly. I say butterflies because that’s the only word I have to explain it, but it’s really that,” he said. “I can feel that change, that turn. I’m shaking the hand of somebody who fought and could have died just to change my life.”

For Georgia Shannon, a foot soldier, it’s her 25th year of coming to the Jubilee.

“If you were on that bridge, which I was, that’s what brings you back. Memories,” she said. “But one thing I cannot do is cross that bridge anymore because I have some kind of phobia. Every time I try to, all those memories come back. It was terrible. It was a terrible time. I just can’t go back.”