Foot solider ready for another Jubilee 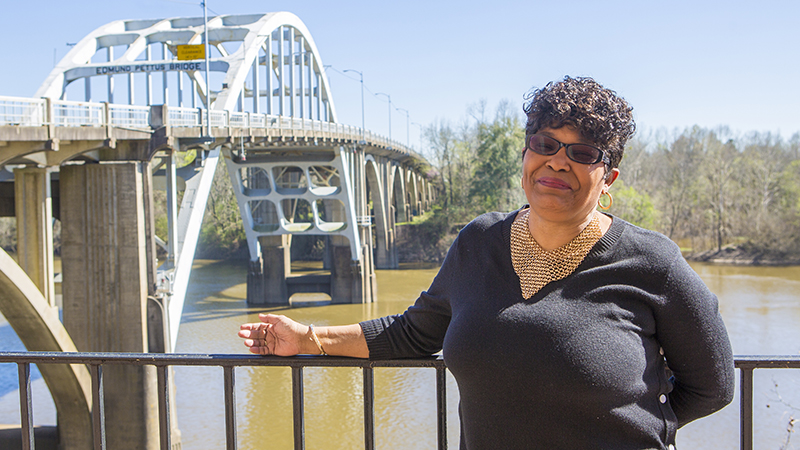 Linda Lowery, a foot soldier in the voting rights movement, poses for a photo in front of the Edmund Pettus Bridge. (Alaina Denean Deshazo | Times-Jpurnal)

One of the youngest peaceful protesters of the Selma to Montgomery march, known infamously as “Bloody Sunday,” is getting ready for another bridge crossing reenactment.

After years of distress due to the memories of that fateful day in March of 1965, Linda Lowery has found strength in numbers and in children to help empower her through the hateful attitudes expressed towards her throughout her life.

“I used to be afraid. I used to only be able to walk across with a crowd, but I am not as afraid anymore,” Lowery said. “I believe the people in the reenactment should get a spirit of empowerment. They are coming here looking to feel how others felt on that day.”

Lowery says that on this day, and many others, she witnessed first-hand the physical and verbal abuse African-Americans endured during that time.

Lowery then used her experiences of witnessing so much as a child to influence the lives of other children through her book, “Turning 15 on the Road to Freedom,” and through speaking events strewn throughout the country.

Being a witness of the violence of the 60s and now an experienced civil rights supporter, Lowery has seen the progress made for minorities’ equal rights. While she believes that there have been significant strides in the right direction towards racial harmony, she also states that there are some shortcomings as well.

“We have made a lot of progress since then. I never thought I would see a black president in my lifetime,” Lowery said. “But there is still work to do. I thought the use of the ‘n-word’ would have dwindled out by now, but people still say it like it is okay. I didn’t think they would still use a word like that.”

Despite the continuing existence of racial tensions, Lowery is prepared to take place in another Bridge Crossing Jubilee, and is overjoyed by the amount of people who will be coming into town for the event to pay their respects to those who endured the trying times.

According to Lowery, she has been contacted by people all over the world who are interested in her story and respect her efforts towards civil rights. This includes interest from a Swedish newspaper, theater versions of her book in Los Angeles and speaking to children in Columbus, Ohio.

The multiplicity of interest in Lowery’s story from people over the country and the world mirrors the interest people have towards racial advancement and participating in the bridge crossing reenactment.

“Those who come in are those who go back to their communities and make a difference. It reenergizes people and teaches them about the good of non-violent movements,” Lowery said.

“If we don’t lift up our brother and sister, we all fall. I have been able to change a lot of people’s minds because of my story. This story helps me, helps the children and helps adults.”

While Lowery loves to influence the perspectives of people from all ages and races, children will always remain her favorite. The success of her children’s book has empowered her to impact people both inside and outside of Selma, winning awards from the American Library Association and seeing her story being turned into theater performances in multiple locations.

Her influence towards racial equality has resonated so loudly that now Washington D.C. wants to bring her up to speak in the nation’s capitol. While she plans on talking to children and teachers, rather than politicians, Lowery says she would not have it any other way.

“The children can lead movements. The politicians will have their ways and they won’t change. They have been there too long,” Lowery said.

“But the children, they are much better to influence. I want to encourage them to grow up believing they can be something great. I believe it is important to go anywhere and everywhere.”

A frequent attendee of the Jubilee events, Lowery has expressed her interest in meeting Doug Jones, Terri Sewell and congresswoman from California, Kamala Harris, at the Martin and Coretta Scott King Unity Breakfast to tell her story and speak about issues she finds important.