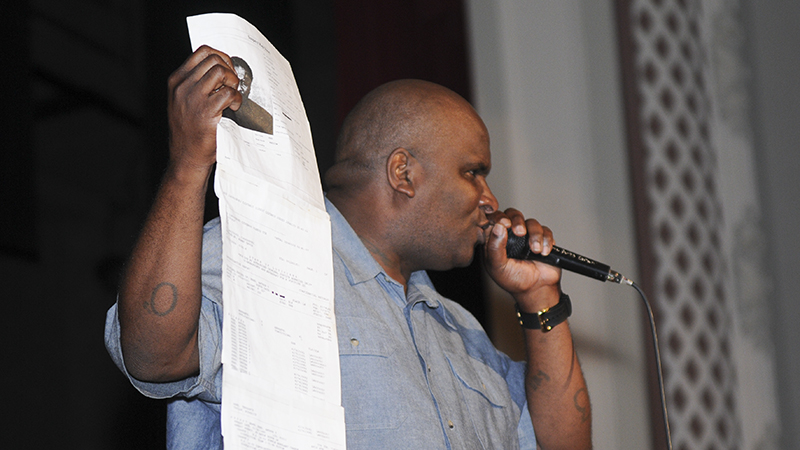 Arthur “Silky Slim” Reed holds up his arrest record, as he talks to children at School of Disovery Friday afternoon for the Children’s Sojourn, which is part of the Jubilee.

Many students in Selma and other area schools spent part of their day at the School of Discovery learning about the importance of children in social movements.

The Children’s Sojourn, one of many events going on this weekend for the Bridge Crossing Jubilee, was a way to educate and motivate youth.

“Every successful movement in the United States and in many other places happened because of children,” said Renee “Yomi” Goodall, who led the program.

As students from the School of Discovery and Southside High School entered the J.A. Pickard Auditorium, a film called “The Children’s March” played. The film showed how children played a pivotal role in marches in Birmingham in the Civil Rights Movement in 1963.

Goodall said children have played a major role in many social movements because adults faced threats of losing their livelihood.

She said young people stood up because they had nothing to lose and everything to gain.

“The children stood up, and the children came out, and that’s the reason these movements were successful.”

Students heard firsthand experience of Bloody Sunday from Hugh Stewart, a foot solider from the Voting Rights Movement. They also heard from Arthur “Silky Slim” Reed, a former gang member turned activist. Reed encouraged the students in the audience to get an education and not turn to a life of crime and drugs. Reed travels the United States and talks with children about gangs and violence.

“We’re in school, so you should be getting educated. But some of us take our education for granted and then we end up like I was — 16 years old, locked in prison, can’t read, can’t write,” Reed said. “What we try to do is come out and give you that message beforehand.”

The Bride Crossing Jubilee continues today with several activities. The Foot Soldiers Breakfast is at 8 a.m., the parade is at 9 a.m. and the street festival is from 11 a.m. until 7 p.m.