Selma woman on road to recovery after near-fatal wreck 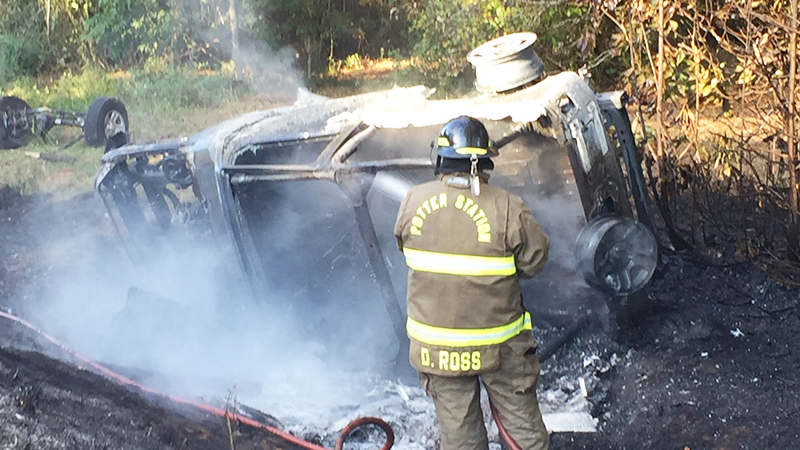 Pam Cunningham has returned to work after a near-fatal single-vehicle crash in October on Dallas County Road 219. Cunningham was pulled from the burning vehicle by Selma businessman Boyd Fuller and another man.

Selma resident Pam Cunningham is back at work and continues to make a full recovery after her life was saved by two Dallas County men following a high-speed single-car wreck back in 2017.

On the night of Oct. 3, Cunningham was traveling home to Selma from Tuscaloosa down County Rd. 219, when she began to get drowsy after a long day. With this not being the first time she has dealt with sleep spells while driving, Cunningham believed she would be able to stay awake for the rest of the trip home.

The drowsiness continued, reaching the point where Cunningham could barely keep her eyes open. Giving in, she decided to close her eyes for just a brief moment.

The next time she opened them, she and her car were tipped sideways in a ravine on the opposite side of the road, unable to move with searing pain permeating through her entire body.

While Cunningham does not remember the speed she was going when she veered off and wrecked, she does know she was going “very fast” on cruise control, meaning the car did not slow down when her foot eased off the gas. The impending collision took off her Jeep’s entire axle.

But that was not the ending of Cunningham’s dire situation, as the high impact from the crash began to set the car on fire.

“I could not believe what I was looking at when I opened my eyes. I did not think I was going to make it,” Cunningham said. “I heard that ‘snap, snap, pop’ that sounded like crackling fire. I would have burned.”

But to the fortune of Cunningham, one Selma man, Boyd Fuller, and another unnamed man came upon the scene just in time.

According to Fuller, both he and the man that was slowing down in front of him did not originally notice the small fire building, but rather saw the car tipped on its side while driving by.

Upon approaching the car, Boyd thought that the Jeep was unoccupied, or that whomever was inside was surely dead.

“I was hoping no one was in there, because I thought there was no chance anyone was alive. I thought ‘no way,’ but then the other man shouted that there was a woman inside,” Fuller said.

“By then, the car was filling up with smoke. It was one of those situations that you knew it was going to blow up.”

This realization that an explosion was imminent created an even higher sense of urgency than was already present in the situation. With smoke filling up the car and fire at Cunningham’s feet, Fuller and the other good Samaritan had to spring into action to free her from the car.

Cunningham was still in tons of pain and could not move, despite fire inching closer and closer. It would later be discovered that she suffered a burst fracture in five places in her back, five broken ribs and a broken sternum, rendering her immobile in the demolished vehicle.

In order to pull her out, Fuller and the other man broke open the back window with a hammer, and then Cunningham shot her arms back so the men could pull her out, screaming in agony the entire time. Despite the immense level of pain Cunningham was enduring through the rescue attempt, Fuller knew it was necessary.

“When she put her arms back, we had to pull her out by the hands because we could barely reach her. She was in a lot of pain, but we had to get her out,” Fuller said.

The necessity of their improvised rescue was proven right just three minutes later, when the car spontaneously combusted into a blaze that engulfed the car from headlight to taillight.

Additional people came to Cunningham’s aid after she was carried to a safe distance from the burning car.

Luckily, the next person who pulled over was a nurse. Before emergency services showed up, Fuller was able to wave down a game warden as well.

Using the game warden’s truck, Cunningham’s team of helpers was able to prop her up in the back until medical attention arrived. Cunningham says that the fire department and ambulance had a “pretty good” response time.

While the four individuals continue to receive endless praise to this day from Cunningham, Fuller is even more shocked by the number of people who chose to drive right on by and not help.

Cunningham was originally taken to DCH Regional Hospital in Tuscaloosa before ending up at UAB due to the instability and extent of her injuries. She spent nine days there before beginning rehabilitation, mostly in her own home.

Along with the major injuries were a multitude of scratches and bruises, but not a single burn of any degree.

She is progressing nicely from her injuries, recently returning to her work as a nurse at the Centreville Cahaba Medical Center. Starting off needing a walker, Cunningham is now able to get around using the assistance of a cane.

Although the pain was severe and the rehabilitation was a long process, Cunningham is just thankful to be alive and well. Along with the two men who saved her life, multiple people have stepped up to help her through her recovery, and she is forever grateful.

“I cannot believe how nice people are. I spoke to Fuller on the phone first, and then was able to speak to him in person. It was obviously very emotional,” Cunningham said.

Fuller works in the family business at Fuller Building Supply and also helps coach football in the Dallas County area. He was on the way to coach a game when he came across the scene of Cunningham’s accident. Since he saved her life, Fuller has received praise all over. However, Fuller was quick to deflect praise to others, despite his efforts.